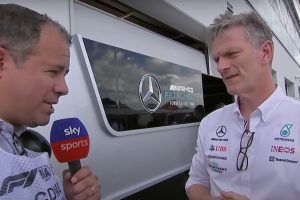 Mercedes chief technical officer James Allison is paying a rare visit to an F1 Grand Prix in a bid to help the team get on top of the problems which are plaguing their season.

The constructors’ world champions have been well off the pace set by Red Bull and Ferrari in 2022, having been blighted by porpoising and bouncing following a major overhaul of technical regulations. The severe bouncing left Lewis Hamilton with chronic back pain during the Azerbaijan Grand Prix last weekend and struggling to get out of his car after the race.

Other teams have also been affected by the issue, prompting the FIA to intervene. The governing body has said it will closely monitor the bouncing on safety grounds and could even order teams to modify their setups. That could include increasing ride heights, which could potentially hinder the performance of the Mercedes even further.

Having been the sport's dominant team throughout the hybrid era, it is clear the Brackley squad have got it wrong with the design of their 2022 car following the seismic change of regulations.

In an emergency measure, technical chief Allison, who usually stays in the UK for race meetings, has made the trip to Canada as Mercedes look to rectify their issues.

And he faced an awkward grilling from Sky Sports' pitlane reporter Ted Kravitz over the team's struggles. Kravitz asked: “How, as a team, did you get this year’s car so wrong?”

Do you think Mercedes will win an F1 race this year? Have your say in the comments section below.

A slightly nonplussed Allison replied: “You sound like my mother-in-law. I wish I could answer that because if we had the answer we’d have clearly already fixed it.

“I think we clearly didn’t see the porpoising problem coming and I think that’s true, to a greater or lesser extent, up and down the pitlane. That’s a problem we’ve largely got on top of but we’re still left with a car that doesn’t really have enough rear grip, and is suffering from an unpleasant ride characteristic because all of these cars are very stiffly sprung and very near the ground.

“It’s not a competitive overall package yet. Why have we arrived like that? I guess that will become clearer to us and everyone else in the fullness of time.”