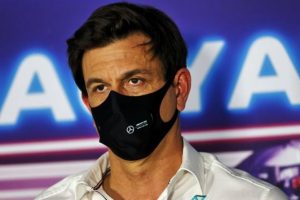 Toto Wolff has promised that he and his reigning world champion Mercedes team will “leave nothing on the table” as they battle Red Bull for both the Drivers’ and Constructors’ Championship. Mercedes currently have a slender lead in the standings for both categories after Lewis Hamilton’s second place finish at the Hungarian Grand Prix.

Wolff has overseen an era of unprecedented success for the Brackley-based outfit, completing a team and driver double in each of the previous seven seasons since the cars were fitted with the V6 turbo-hybrid engines.

In 2021, Hamilton currently leads his bitter rival Max Verstappen by eight points, while the team are ahead of Red Bull by 12.

Wolff has emphasised just how far he and the organisation are willing to go to continue that remarkable run of triumphs.

The Austrian was asked by GPFans Global about what marginal gains could affect the title fight, and responded in typically shrewd fashion.

Wolff said: “The words ‘marginal gains’ are a copyright of Sir Dave Brailsford who invented that many years ago for his cycling team.

JUST IN: Ferrari’s Sainz admits why he no longer gets ‘goosebumps’ from F1

“I think it is about really leaving no performance on the table, minimising mistakes, and that may at the end contribute to winning or not winning, and it could be with the tiniest of margins.”

No doubt the threat of giving their all to the competition will be seen as a challenge to Red Bull and Wolff’s counterpart Christian Horner.

The two have been frequently embroiled in rows this year with tensions reaching boiling point on numerous occasions.

At the Azerbaijan Grand Prix in June, Wolff escalated the conflict when he described Horner as “a bit of a windbag who wants to be on camera” after the pair had been disagreeing over the use of Flexi-wings for a number of weeks.

He has since admitted that he regrets the incendiary comment.

The war of words between not just the two chiefs but their drivers and teams as a whole has intensified amidst the recent race day controversies at Silverstone and in Hungary.

On both occasions, a Mercedes driver forced the Red Bull cars to crash off the track, with Hamilton and Verstappen’s incident at the British Grand Prix now firmly written into F1 folklore.

Wolff’s comments imply that Mercedes will continue to be as aggressive as possible when F1 returns to action after the mid-season break.

The first stop back is at Spa-Francorchamps for the Belgian Grand Prix weekend, with the first practice taking place on August 27.

Wolff admitted that the Mercedes car did not have any more developments added over the course of the hiatus with the Silver Arrows joining the rest of the F1 teams in focusing their energy on producing a competitive car for 2022.

When asked about if the car had changed at all, Wolff replied: “All there is, is all we have.”

The new season brings with it a new car design by F1 authorities, designed to encourage closer racing and more overtaking.