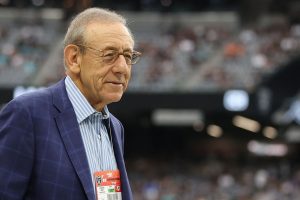 Excitement is rising for the Miami Grand Prix, as Formula One heads to a new venue that has aspirations of rivalling Monte Carlo as the crown jewel in the annual calendar.

The road to Miami was not a smooth one, however, with plans for a downtown street race scrapped, while even using roads around the Hard Rock Stadium was problematic as fans expressed their concerns – eventually resulting in a semi-permanent, custom built circuit around the stadium itself.

Landing a 10-year contract with F1, Miami is here to stay and is the first of two United States races on the calendar this year, with Austin once again hosting in a few months time, while Las Vegas will take the US tally of Grand Prix races to three when it makes it's own debut next year.

Stephen M Ross is the man responsible for bringing Formula One to Miami, trying for years to get the race on the calendar and the using his ownership of the Hard Rock Stadium to play host to the event, finally bring the plans out of limbo and moving forward to put the city on the calendar.

Born in Detroit in May 1940, Ross has a net worth of $7.7bn (£6.2bn) and founded The Related Companies, a global real estate company, in 1972. The company is well known for developing the Time Warner Centre in New York, as well as the Hudson Yards Redevelopment Project.

While that put him on the map, the turning point came in 2008 as he has doubled his net worth in the years since, and he purchased NFL franchise the Miami Dolphins in 2008 with a 50% stake.

The following year, Ross finalised the purchase of another 45% to give him 95% ownership of the team and the Hard Rock Stadium, while in the following years he brought in singer Gloria Estefan and tennis duo Venus Williams and Serena Williams as minority shareholders.

In 2012, further attentions were made towards sport and entertainment with the launch of RSE Ventures, which also focuses on media and marketing, food and lifestyle and technology. The company owns the Drone Racing League and Relevant Sports Group, which owns the International Champions Cup – a pre-season football tournament that sees European teams play in the US, Asia and and Europe.

HAVE YOUR SAY! Will Miami become the crown jewel of the Formula One calendar? Comment below.

Away from business, Ross is a major benefactor to the University of Michigan with lifetime contributions of $478m (£386m) that make him the largest donor in the university's history – and he ranks only behind New York City mayor Michael Bloomsberg in terms of higher education gifts.

He was also a major supporter of the 2012 presidential campaign of Mitt Romney, which was unsuccessful, while in August 2019 it was reported he would host a major fundraiser for Donald Trump's 2020 election campaign at his Hamptons home, though he made it clear he didn't fully agree with the controversial president.

In 2015, his links with Formula One first emerged as it was reported he was keen on a takeover of F1 alongside the Qatar Sports Investment group, the owners of French football giants Paris Saint-Germain, but ultimately miss out as Liberty Media secured ownership.