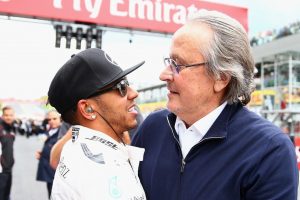 Lewis Hamilton has led the tributes following the death of McLaren shareholder Mansour Ojjeh at the age of 68.

The British team announced on Sunday morning his passing, having been aligned to the organisation for 37 years.

Ojjeh, who worked with Ron Dennis after buying into McLaren in 1984, was a key figure in the constructor’s ensuing success in Formula One.

In a statement ahead of Sunday’s Azerbaijan Grand Prix, McLaren said: “It is with deep sadness that McLaren Racing announces the death of Mansour Ojjeh, shareholder of McLaren since 1984.

“Mr Ojjeh passed away peacefully this morning in Geneva, aged 68, surrounded by his family.

“All at McLaren Racing mourn his loss together with his family, to whom the team sends its most heartfelt condolences.”

Seven-time world champion Hamilton posted a tribute to Ojjeh ahead of Sunday’s grand prix in Baku.

Hamilton, 36, wrote: “I carry a heavy heart into the race after the loss of a close friend, Mansour Ojjeh.

“He fought for so many years with such courage and the heart of a lion.

“I am so grateful to have known such a man. I will miss his jokes, he was the best at telling them, and his big hugs. This man loved unconditionally.

Zak Brown, McLaren's chief executive, described Ojjeh as a "titan of our sport".

"The passing of Mansour Ojjeh has devastated everyone at McLaren Racing," said Brown.

"Mansour has been etched into the heart and soul of this team for nearly 40 years and was intrinsic to its success. He was a true racer in every sense. Ultra-competitive, determined, passionate and, above all, perhaps his defining characteristic: sporting.

"No matter the intensity of the battle, Mansour always put sport first.

"Mansour was a titan of our sport, yet modest, unassuming and disarming to all he encountered. His easy manner, sharp wit and warm humour touched all those who were fortunate to know him.

"His love of this team was palpable for all to see and those of us privileged to work for McLaren will remember Mansour as an impressive yet humble, human, father-figure who showed us at the most individual, personal level how to fight adversity and be resilient.

"He will remain in death what he was in life: a constant inspiration to all of us at McLaren and beyond. Mansour's legacy is secure."

F1 commentator Martin Brundle added: "This is terribly sad news. The nicest, most straight forward, and genuine person I’ve ever met in Formula One. A quality man at every level.

"Condolences to his wonderful family, and his many many friends, which I’m proud to have been one of."