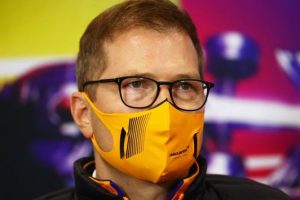 McLaren CEO Zak Brown is keen to see the outcome of the FIA investigation into the events of the Abu Dhabi Grand Prix – but has stopped short of accusing the authority of corruption. The controversial events at the Yas Marina, which resulted in Max Verstappen being crowned world champion following a dubious safety car procedure late in the race, has continued to divide the sport.

Mercedes, who had two subsequent protests over the procedure dismissed, remain incensed at what transpired, only agreeing to drop their notice of intent to appeal after the FIA promised a fully enquiry into the issue.

That investigation is currently ongoing, but the Silver Arrows, and Lewis Hamilton himself, have reportedly demanded the removal of FIA race director Michael Masi, who has come under mounting pressure following accusations that he deliberately manufactured a dramatic finish in Abu Dhabi.

Hamilton, 37, is yet to speak publicly since the race, but there are mounting fears he may yet retire from F1 ahead of the 2022 campaign if he’s not satisfied by the outcome of the investigation.

Brown meanwhile, has admitted he thinks the situation could have been handled differently by Masi, but repelled the notion that there was any malicious intent from the Australian.

JUST IN: Alpine CEO aims ‘old and shabby’ dig at Silverstone and Monza

Addressing reporters at a McLaren media briefing, Brown said “I don’t think this was a malicious decision. So for those that might have a view that the sport’s corrupt etcetera, I don’t agree with that.

“Do I think potentially a different decision could have been made? Yes, probably. I want to wait to see what the FIA comes out with, but I don’t think it was malicious, and therefore I don’t think it’s corrupt.”

Brown, 50, likened the saga to officials making contentious decisions in other sports, and believes the continued debate will simmer down once the 2022 campaign gets underway.

“It gets pretty exciting and then the season starts and it soon becomes a thing that you never forget about, but it’s a thing of the past.”

However, Brown did also voice the need for the FIA to clarify what happened, and assure teams there would be no repeat in order to avoid any potential confusion ahead of the season opener in Bahrain on March 20.

This campaign is set to be an intriguing one, with new technical regulations part of an overhaul designed to make racing more competitive.

The new measures could conceivably end the current dominance of Mercedes and Red Bull, and more specifically Verstappen and Hamilton, with McLaren one of the teams now tipped to launch a bid for the drivers’ title.

Despite finishing fourth in the Constructors’ standings last year, slipping back a place from 2020, the British team notched their first one-two finish at an F1 race in over a decade.

It was Daniel Ricciardo who prevailed in Monza at the Italian Grand Prix, leading home team-mate Lando Norris.

However, it was Norris who enjoyed the better individual season, finishing fifth overall with Ricciardo three places – and 45 points – further back.