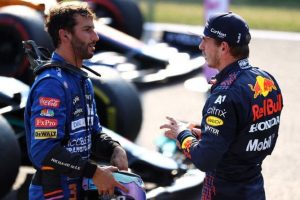 Red Bull’s Max Verstappen has been compared to the greatest Formula 1 drivers of all time this week. Former F1 driver Stefan Johansson thinks the Dutchman, who won his first world title last month, races harder than the likes of Ayrton Senna and Michael Schumacher. Verstappen’s aggressive driving style has divided opinion. Johansson wrote on his blog: “The issue we have right now on track is that Max has taken the Senna playbook and the Schumacher playbook to a whole new level.

“Generally, I think there’s a good code of conduct between the drivers. Most of the current crop of the new generation of drivers are racing very clean but hard, there’s been some really great battles this year but they’re not at the front and therefore it goes un-noticed for the most part. No one cares about the guys in fifth or sixth place.”

One thing Verstappen has been well known for since he made his Formula 1 debut at the age of 17 is that he is blessed with great pace.

This is why Red Bull invested so much time into making him their number one driver.

However, this didn’t always help team harmony, evident when Daniel Ricciardo was the Dutchman’s teammate at Red Bull.

During the 2018 Azerbaijan Grand Prix, Verstappen and Ricciardo clashed after the Australian lost position to his teammate.

Ricciardo felt his team hadn’t helped him, and his frustration was evident when he crashed into the back of Verstappen causing them both to retire.

Speaking about the incident in 2019, Ricciardo told Formula 1’s Beyond the Grid podcast: “I guess a few things came up to the surface after that.

“We touched wheels a few times where it was always Max coming into me as opposed to me going into Max. Part of me was waiting for the team to say ‘cut the s***’ but never really got that.

“I eventually passed Max. The undercut wasn’t powerful. I think the overcut was more powerful because of tyre warm up, so I pit first and eventually Max had come back out in front of me.

“So then I was furious as well, I’m like ‘guys, I’ve put all the hard work in, I’ve passed him and now he’s back in front of me, surely you are just going to let me go this time?’

“So I came on the radio to say something but my engineer was like ‘no, you’re racing Max’, which means no team orders, you have got to pass him again.

“To be honest, at the time of impact, I was just like ‘who cares? They [the team] deserve this’. That was my honest feeling. I wasn’t feeling sad or angry that I’ve just lost points.

“I’ll say now. I was more just like ‘f*ck you guys’. I think everyone saw it [the crash] coming.”

Asked whether the incident in Baku was what provoked him to leave Red Bull, Ricciardo replied: “Certainly, the week after that, yeah.

“I decided in my mind that I need to move on. But then you go to Monaco like a month later and I have like the highest of highs and start thinking ‘oh I was just emotional in Baku, we’ll figure it out’.

“But, for sure, Baku was a tough one for me to move on from.”