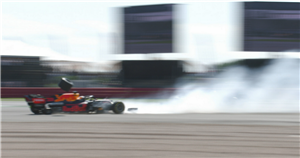 Max Verstappen has been taken to hospital for 'precautionary tests' following his crash at the British Grand Prix.

The Dutchman was on pole at Silverstone on Sunday but lasted less than one lap in the Midlands after colliding with Lewis Hamilton in the early stages.

Verstappen and Hamilton's wheels touched as the Red Bull veered off track and hit the barriers at 180 MPH.

Somehow the former managed to escape the incident unscathed, as he exited his car and walked into an ambulance to be checked over.

Verstappen's Red Bull was later towed away and was completely destroyed following the high-speed collision.

And Red Bull have no confirmed the Championship leader has been taken to hospital for more tests.

A Red Bull statement read: "Following a first-lap incident at Copse Corner between Max Verstappen and Lewis Hamilton at the British Grand Prix, we can confirm that Max Verstappen walked away from his car and was immediately taken to the Silverstone Circuit Medical Centre.

"Following an assessment by the trackside doctors at Silverstone Circuit Medical Centre, Max Verstappen has been taken to a local hospital for further precautionary tests." Hamilton went on to win the British race, despite receiving a 10-second penalty for his role in Verstappen's exit.

Those fans packed into Silverstone were delighted with the hard-fought win. But Red Bull chief Christian Horner felt Hamilton should have been given a more severe penalty.

Team boss Horner said: "Everyone who's driven that corner knows you don't stick a wheel up the inside at Copse. He's put him in the fence. Thank God he's not been hurt. It was a desperate move.

"You do not stick a wheel up at Copse, one of the fastest corners in the world. That's just dirty driving."

Hamilton now sits just eight points behind Verstappen in the race for the 2021 title.