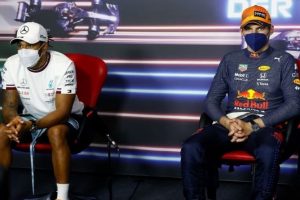 Max Verstappen has once again addressed the British Grand Prix incident, that saw the Dutchman collide with main title rival Lewis Hamilton on the opening lap of the race, admitting he tries to stay out of trouble on track, adding that it’s “not always in your hands if other people drive into you.”

Much has been said about the collision in the aftermath, that saw Hamilton hit with a ten-second time penalty for causing an accident, with the seven-time world champion calling Verstappen “probably one of the most aggressive drivers here” as a war of words between Mercedes and Red Bull escalated.

Red Bull firmly blames Hamilton, with Christian Horner branding the 36-year-old “desperate” and slammed what he called “dirty driving” from the Briton.

Verstappen meanwhile believes he’s no more aggressive than any other driver on the grid.

“I feel like I just race hard,” Verstappen tells The Race’s, Scott Mitchell.

JUST IN:
Every free 2022 F1 seat as Bottas battles Russell for Mercedes drive

“But I think my awareness of where I can position my car is really good and I haven’t been involved in having another car off the track. I have zero penalty points. I think that says quite a lot.

“I have been racing hard my whole career. And the last few years, the aggressive approach is out. I’m just making it more difficult for people.

“Of course, some people might think a bit different about that, but I actually think that the racing side is a really strong point of mine and I also really know how to stay out of trouble.

“But that is not always in your hands if other people drive into you.”

“I will continue to race like I did,” he says of Silverstone. “I felt like I didn’t do anything wrong in that fight.

“I gave him more than enough space but he completely misjudged the cornering speeds, and especially the angle he went into that corner there was no way he was going to make the corner with the speed he entered it.

“When you go so close to the inside wall, on the entry to Copse and then still try to do the same speed as I am doing while opening up the corner again and then giving him more than a car width space, you’re going run out of road. But this time he ran into my right rear and caused me to hit the wall.

“I was very well aware where I was positioning my car and I also know that you go in with such a tight angle, especially from his side, from entry to mid to the exit you have to open up the corner, to give him the space. But he still ran out of space.

“From my side, I continue to race like I did. And I think he will also learn from what happened there.”

Verstappen heads into the second half of the season hoping to claw back some important points in the championship standings, with eight points separating the Dutchman from his main title rival Hamilton.

Red Bull also fell behind Mercedes by 12 points heading into the summer break, after scoring just two points across the Silverstone and Hungary race weekends.