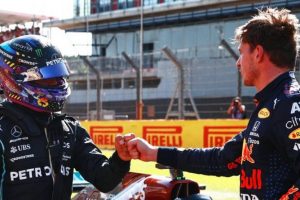 Max Verstappen heads into this weekend’s Saudi Arabia Grand Prix with an eight-point advantage over Lewis Hamilton, but knows the gap could have been bigger following the British driver’s recent resurgence. Following back-to-back wins in America and Mexico, the Dutchman held a 19-point lead over his rival going into the race in Brazil this month.

That became 21 after the Red Bull man finished second in the Saturday sprint race, capitalising on Hamilton being sent to the back of the grid for a DRS infringement in qualifying.

However, the seven-time world champion then arguably produced one of his greatest drives the following day, coming from 10th to overtake Verstappen in the closing laps and cut his overall lead to 14 points.

Hamilton then took that momentum into Qatar, and delivered a dominant display to again lead home another one-two finish for the pair, although Verstappen did notch the fastest lap – meaning the gap was only reduced by six points.

Verstappen, 24, knows he could have been on the brink of a maiden title had things gone differently since Mexico, but has kept his composure despite having Hamilton bearing down on him.

“I would of course have liked to make it a bigger gap,” he told reporters this week.

“But when you don’t have the pace, it’s impossible to do that, so we’ll just try to be better, and come back strong, especially in Saudi on the street track, and then yeah, we’ll see in Abu Dhabi.”

Despite most pundits tipping the title race to go to the wire in Abu Dhabi, it could yet be all over by then if things go Verstappen’s way this weekend.

If he were to gain 18 points on Hamilton in Saudi Arabia, it would be enough to end the British icon’s run of four straight championship wins. In reality, for that scenario to happen, Verstappen would need a top-two finish coupled with the Mercedes man finishing outside the top 10.

An advantage of 26 points would be enough even if Hamilton went on to win in Abu Dhabi, as well as notching the fastest lap and seeing Verstappen not finish. That’s because should the two drivers finish level, the Dutchman’s superior win record this season would come into play.

To add to the tension between Christian Horner and Toto Wolff’s teams, the Constructors’ battle is also on a knife-edge.

Despite Hamilton’s win in Qatar, the ‘Silver Arrows’ lead by just five points, with the performances of Sergio Perez and Valtteri Bottas from here on in also going to be crucial in deciding the destination of the title.

The ill-feeling between Red Bull and Mercedes has been evident throughout 2021, exacerbated by on-track collisions between Verstappen and Hamilton at both Silverstone and Monza.

The needle was evident following the race in Brazil, with Mercedes left incensed when Verstappen escaped punishment for seemingly running wide as he sought to block an overtake.

They subsequently appealed the decision, but FIA officials ruled the incident did not merit investigation.