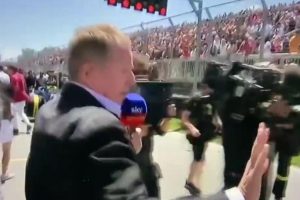 Martin Brundle’s back catalogue of hilarious gridwalk moments received another addition at the Canadian Grand Prix.

The popular Sky Sport F1 commentator and former racer has become legendary for his pre-race ambles down the grid where he questions drivers, team bosses and even celebrities. With Montreal being one of the more traditional venues on the calendar, celebrity interviews, which have caused the most cringe-worthy moments over the years, weren’t on the cards.

However, there was still a moment of hilarity when Brundle went to wave at fans in the crowd, only to step right in front of the Sky Italia presenters as they were broadcasting live.

On realising his error, Brundle said: “Ooops, I’m getting in the shot there, sorry about that.”

A third fan tweeted: “Martin Brundle must be protected at all costs, what a man, what a legend #CanadianGP.”

Earlier this season, before the maiden Miami Grand Prix, Brundle confused US sportsman mistook basketball player Paolo Banchero for American footballer Patrick Mahomes and was given the cold shoulder by Serena and Venus Williams.

What's your favourite Martin Brundle gridwalk moment. Tell us in the comments section below.

Brundle subsequently admitted how difficult he finds gridwalks and revealed he never watches them back.

“There’s a reason why I’ve never watched back an F1 gridwalk in a quarter of a century of doing them,” he said on social media. “You have no idea how much I dislike doing them but somehow those crazy moments have defined my professional career. Oh well, that’s the way it is.”

He has also admitted his frustration at being better known for his gridwalks than his highly respectable racing career.

“I’ve been in F1 for 38 years,” he told The Telegraph. “I had nine podiums as a F1 driver. I was a world sportscar champion, a Le Mans winner, a Daytona winner. I like to think I’ve called some pretty good races in my time. Worked with the great Murray Walker…

“But there’s no doubt about it. I’m most famous now for gridwalks. And frankly it annoys me! I don’t really want to be remembered for getting the wrong person, or being ignored, or being mucked about by some bodyguards. It [the gridwalk] has grown a life of its own,” he added. “But I shouldn’t knock it because it’s become my USP.

“In America a couple of weeks ago, kids were coming up and going ‘Man, we love you.’ And I’m like ‘How do you know me?’ And of course it’s through TikTok, or some crazy gridwalk moment. My Twitter following went up by 50,000 after the thing with Megan Thee Stallion. And again 30-40,000 after Miami.”