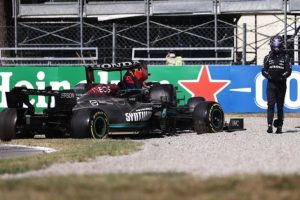 Lewis Hamilton is F1’s most successful racing driver. He is level on world championships with Michael Schumacher with seven titles, but the Briton has secured the most wins and most pole positions in the history of the sport.

He has electrified fans on the track with his skill in all conditions against high-calibre opposition over the last 14 years.

The racer has also been involved in some accidents on the track, most notably with title rival Max Verstappen at the Italian GP last weekend.

So which crashes were the biggest?

In his rookie season, Hamilton suffered arguably the worst crash of his career while qualifying for the 2007 European GP.

Driving for McLaren, he crashed into the barriers due to a wheel gun failure which caused the wheel to not be secured on the car.

The wheel rubbed against the car, destroying the wheel and tyre, and sending the car into the wall.

He was then taken to hospital for a precautionary scan, but was deemed well enough to take part in the race the following day, in which he finished ninth.

Canada has proved to be a very successful track for Hamilton with seven wins, but in 2008 he rammed into the back of Kimi Räikkönen after failing to spot a stop sign when exiting the pit lane.

Nico Rosberg hit the back of Hamilton as a result.

Both Hamilton and Räikkönen retired from the race, each leaving their vehicles at the exit of the pitlane.

The Brit was involved in an accident that began when Romain Grosjean made a good start and moved up to the inside of La Source, but in doing so, squeezed Hamilton between himself and the pitwall.

The pair touched wheels which caused them both to lose control. Grosjean then speared into the back of Sergio Perez and became airborne, crashing heavily into Fernando Alonso and missing the Spaniard’s head by a few inches.

Grosjean came to rest at the outside wall. Hamilton crashed into Kamui Kobayashi as well as Alonso after Grosjean’s heavy impact.

The Frenchman was fined €50,000 and was given a one-race ban for his role in the crash at the start of the race.

Hamilton was in the heat of battle with Mercedes teammate Nico Rosberg in their pursuit of the world championship.

At the start of the race, Rosberg got around the outside of Hamilton in turn one.

As the German defended his position, Hamilton went off the track and spun as they collided at turn four, ending the race of both Mercedes drivers and resulted in a safety car being deployed.

The penultimate race of the 2017 season saw Hamilton crash out at the beginning of the qualifying session.

Hamilton lost the back end of the car with over-steer, seemingly due to a driver error, causing him to retire from Q1 without setting a lap time.

He started the race from the pitlane, but eventually finished fourth, less than one second off a podium finish.