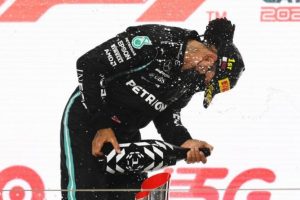 Lewis Hamilton has three key new influences helping his bid to beat Max Verstappen to the Formula One Drivers’ Championship. Hamilton is now eight points behind his Red Bull rival with just two races of the calendar remaining after winning his second successive race on Sunday.

The Mercedes driver was in top gear on Sunday as he stormed to victory at the inaugural Qatar race.

Hamilton started in pole position and was commanding throughout as his arch-rival Verstappen began the race in seventh after being handed a five-place grid penalty.

The Dutch driver soon carved his way up to second place but was unable to catch Hamilton.

Hamilton’s victory came a week after he won the Brazil Grand Prix and the 36-year-old will be hoping to build on his momentum and leapfrog Verstappen at the top of the leaderboard.

The Briton looked to be out of the title race a couple of weeks ago but has given himself a fighting chance of winning a record eight championship thanks to his recent displays.

JUST IN:
Helmut Marko has Mercedes suspicion ahead of Saudi Arabia

And, according to Sky Sports columnist Martin Brundle, Hamilton’s resurgence is down to three new key influences.

The driver apparently has renewed trust in the factory simulator, works late into the night at the track and has found a new motivation to win this year’s title.

Writing in his column, Brundle said: “There can be no doubt that Hamilton and Mercedes have raised their game at a pivotal point of the championship.

“Lewis has found renewed trust in the factory simulator and works late into the night at the track as he impressively finds new motivation for an eighth title despite his relative age, trophy warehouse, and significant bank balance.”

The veteran is now a decent position to defy the odds and taste more F1 success at the final two races in Saudi Arabia and Abu Dhabi next month.

“It was pretty straight-forward – it was pretty lonely at the front,” Hamilton admitted after cruising to victory in Qatar.

“Of course I enjoy those races where you’re battling through but we needed those points today, so I think a real solid job from the team, just with pit stops and the car.

“I can’t wait to watch the replay of the race to see what happened behind me. I’m not really sure why tyres were going – I’m sure it’s the curbs.

“But I’m really grateful for the points – it’s been a hell of a year. To be at this point in the season and have back-to-back wins is a great, great feeling and puts in good stead for the next two.

“I feel fit fitter than I’ve ever felt so that’s a positive. Big, big thanks to Angela [Cullen, Hamilton’s physio] – she’s helping me train and keep me on my toes.

“Recovery has been great. So yeah, bring on the next two.”