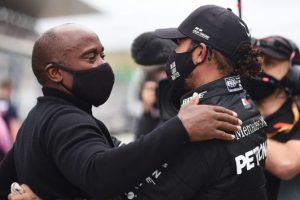 Lewis Hamilton’s dad, Anthony Hamilton, is “optimistic” that his son can topple Max Verstappen in the 2021 Drivers’ Championship despite Red Bull’s dominance in recent weeks. The seven-time world champion heads into Sunday’s race at Silverstone sitting 33 points behind Verstappen.

In six of the nine races, Hamilton and Verstappen have stood in the top-two spots on the podium with some tense racing between the pair.

More of the same is expected at Silverstone today with Hamilton seeking his eighth win at the British circuit.

But Verstappen is in excellent form of late having won the last three races to open up his biggest ever lead at the top of the championship.

The Dutchman won the inaugural Sprint Race on Saturday, leaping ahead of Hamilton from the start.

JUST IN: Russell eager for Mercedes shot to test himself against Hamilton

And it means Verstappen will start in front of Hamilton for Sunday’s race with huge importance set on whoever comes out of the first few corners in the lead.

Even if Verstappen does beat Hamilton to the chequered flag once again, the British Grand Prix doesn’t even mark the halfway point in the season.

Mercedes will be looking to find everything they can to close the gap to Red Bull on the track in the coming months, particularly in the summer break.

For the drivers, all they can focus on is putting in work off the track to best prepare themselves.

And Hamilton has been working in the simulator at the Mercedes factory in Brackley to try and give him the edge.

Anthony Hamilton is at Silverstone this weekend watching his son hopefully edge closer to Verstappen in the championship.

But he remains confident that the 36-year-old has the experience and mentality to overcome the tough challenge.

“Work hard and hopefully the rewards will come.”

Valtteri Bottas has been unable to finish any higher than third so far and he’s missed out on a podium in four of the last five races.