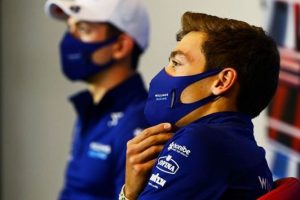 Lewis Hamilton has been warned that he can expect the same “hunger” and “passion” from George Russell that he’s experienced from Max Verstappen this season, if the 23-year-old signs for Mercedes next season, that’s according to David Coulthard.

Russell has been heavily linked with a seat at Mercedes to partner Hamilton at the seven-time world champions, replacing Valtteri Bottas at the team, having impressed hugely over the past three years at Williams.

The 23-year-old came close to victory at the Sakhir Grand Prix as he stepped in for Hamilton, who was recovering from COVID-19 at the end of the 2020 season, however was hampered by a poor pitstop and a puncture left him P9.

Yet, there were some questions regarding his future with Mercedes after he crashed with Bottas at the Emilia-Romagna Grand Prix in Imola earlier in the season.

“We saw George’s hunger and racing spirit when he came together with Valtteri in Imola,” Coulthard told The Mirror. “He probably overreacted there, which is just an opinion.

“But what we did see was his passion behind the wheel and that’s the sort of passion he’s going to need to beat Lewis.

“He’s not going to beat Lewis with pure speed, Lewis is one of if not the fastest drivers of the last decade, George I believe has the talent to match that speed.

“So, where’s he going to beat Lewis? He’s going to beat him with that passion, that hunger, that ‘you might be Lewis Hamilton but when we go on track, I don’t care who you are’.

“Which is exactly what Max Verstappen delivers when he’s in the race car.”

Hamilton currently sits 33 points behind Verstappen in the driver standings, with Mercedes currently trialing Red Bull by 44 points in the Constructors’ Championship, with Bottas struggling this season.

And with time running out for the Finn to impress, Coulthard believes Russell is the one to back.

Hamilton currently sits 33 points behind Verstappen in the driver standings, with Mercedes currently trialing Red Bull by 44 points in the Constructors’ Championship, with Bottas struggling this season.

And with time running out for the Finn to impress, Coulthard believes Russell is the one to back.

“I think George Russell is the real deal. I don’t know this for sure but it seems just a matter of time for George Russell getting announced as a Mercedes driver,” continued Coulthard.

“He’s a coming talent, he showed what he could do when he was in the car in Bahrain. No disrespect to Valtteri who is a very good racing driver and is a grand prix winner, but sport is about momentum.

“Whether it’s motor racing, football or whatever sport you’re following, there’s a time when that talent needs to be given the opportunity. I’ve no doubt that he has the skills to deliver.”