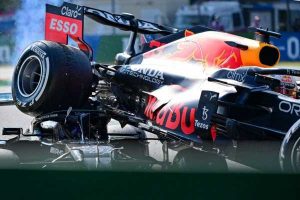 Sunday’s Italian Grand Prix proved just as dramatic as most of this season’s races, with McLaren claiming a one-two thanks to Daniel Ricciardo’s win and Lando Norris finishing second.

The talking point remains the absence of the big two at the top of the drivers’ championships – caused by the pair crashing out after a battle for third place saw Max Verstappen hit the kerb and launch his car over Lewis Hamilton’s, one landing partially on top of the other and both off the track in the dirt.

Thankfully, both racers emerged from the incident largely unscathed, with Hamilton quick to acknowledge the halo device saved him from serious injury.

However, the Mercedes driver also expressed his dismay at his Red Bull rival departing from the collision scene without checking to see if Hamilton needed medical attention.

“I found that a little bit surprising, because ultimately I think when we go out, and when we do have incidents, the first thing we want is make sure if the guy that we crashed into or we collided with is okay.

“But the good thing is I was able to get out. It was a long walk back, but we live to fight another day.”

Verstappen, for his part, made it clear that he had noted Hamilton trying to move on from the hit and thus assumed he was not hurt.

“In the heat of the moment it’s better to walk away so everyone calms down,” the Dutch racer said to Motorsport-Magazin.com.

“Lewis was fine, he was still trying to reverse when I was already out of the car. When you are not fine, you are not doing that.”

Verstappen was deemed at fault for the incident by the race stewards and has been given a three-place grid penalty for the Russian Grand Prix.

After the race at Monza, Verstappen still leads in the drivers’ standings by five points from Hamilton, with the latter’s team-mate Valtteri Bottas – the other podium finisher in Italy – in third and Norris in fourth.