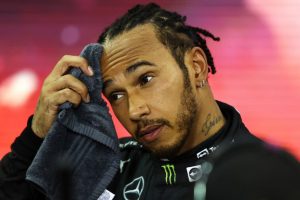 Talk of Lewis Hamilton retiring from Formula One continues to rumble on with the seven-time champion's future with Mercedes reportedly remaining unclear.

Hamilton has kept a low profile since missing out on a record eighth title following the controversial ending to the Abu Dhabi Grand Prix in December.

He has not taken part in any interviews, has not posted on social media and did not attend the FIA's end-of-season gala in Paris last month.

His only public appearances have come when collecting his knighthood from the Prince of Wales and attending Valtteri Bottas' farewell at the Mercedes base.

Speculation surrounding Hamilton's future has previously led to Mercedes chief Toto Wolff admitting he and Hamilton had become "disillusioned" with the sport.

Wolff was also unable to guarantee that Hamilton would drive for Mercedes in the 2022 season when asked about the matter in December.

Sky Sports now report that it remains unclear whether Hamilton will compete in the upcoming season, just two months before it begins.

Speaking on Sky Sports, reporter Craig Slater said: “As we speak right now, I can tell you it is still unclear.

Who will win the 2022 Formula One Drivers' Championship? Let us know in the comments section below.

“69 days to go to the first Grand Prix in Bahrain, I have heard from senior sources close to Lewis that whether or not he will be on the grid for the first race of the season is still unclear at this point.”

Although Hamilton has not confirmed whether he will participate in 2022, those close to him reportedly expect him to again attempt to win a record eighth title.

“I’ve spoken to various individuals since who have had some contact with him," added Slater.

“By and large they told me that they expected Lewis to be back to try and win an eighth world title in 2022.

“What they explained to me though was that even if he seemed to take it well on the night, it hit him very hard in subsequent days, what went on.”

The 2022 season gets under way in March with the Bahrain Grand Prix, with testing taking place in Barcelona and Bahrain at the end of February.