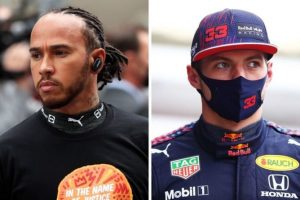 Lewis Hamilton has praised Max Verstappen’s achievements to come from P20 on the grid to second place during an incredible Russian Grand Prix, which saw heartbreak for McLaren’s Lando Norris, who surrendered a win due to rain.

Verstappen was hit with a huge penalty after taking an all-new power unit ahead of the race on Sunday, making the switch during second practice on Friday.

It meant the Dutchman started from the back of the grid at Sochi while leading the championship by five points over Hamilton.

The 23-year-old carved his way through the pack before eventually looking as though he’d have to settle for seventh place.

But another twist came as the rain started to fall, and Red Bull managed to time their pit stop to change for intermediate tyres perfectly to gain a huge advantage to finish second behind only Hamilton.

“To come from last to second is a huge effort. The Red Bulls are so fast,” Hamilton told Sky Sports F1 after the race.

JUST IN: What Hamilton said to Norris in Russian GP paddock

“They’ve been quickest pretty much most of the year. They’ve done a great job. To come from last, have a penalty, two penalties… whatever it was, and come back to second, that is mega damage limitation.

“We’ve got to see what we can do moving forwards. It’s going to be tough to beat them, but we’re going to give it everything.”

As the rain fell, Norris was the only driver not to pit for the wet weather tyres, opting to stay out for the last few laps, claiming his team had not told him quite how bad the weather would be.

As a result, the 21-year-old began to lose control of his car, with Hamilton gaining on him in second place.

Eventually Norris spun and then had to admit defeat, coming into the pits for weather-appropriate tyres. By then the damage had already been done as Hamilton swept past him and into the lead.

“Lando did such an amazing job, he had incredible pace,” Hamilton added.

“He is doing such a great job for McLaren, and it’s very bittersweet to see my old team ahead, them doing so well, obviously they won the last race, so they are doing fantastic powered by Mercedes. It’s good to see them united again.

“The team [Mercedes] made a great call right at the end, I didn’t want to let Lando go and of course I didn’t know what the weather was doing, incredibly grateful to all these men and women that are here and back at the factory.”

Without the rain, Norris looked set to take his maiden win of his career after sealing pole position in spectacular fashion on Saturday.

But with the rain coming down hard, Norris became a passenger in his McLaren, and even as he entered the pits may pick up an extra penalty for crossing the white line.

“Then the rain came and it was very opportunistic, and as I said the team did an amazing job.

“Otherwise there is nothing I can do about who is behind me, that is a dream result for Max, but I’m grateful for the points.”