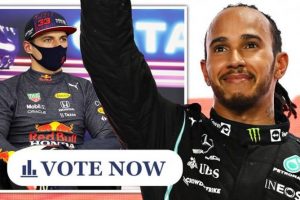 Lewis Hamilton controlled the race from start to finish to narrow the championship gap on Max Verstappen at the inaugural Qatar Grand Prix. The Brit’s win at the Losail International Circuit was his 30th victory at a different track – extending his record for the most races won at different circuits.

The 2021 F1 season has been one of the greatest years in the sport’s modern history thanks to the titanic world championship battle between Mercedes’ Hamilton and Red Bull’s Verstappen.

The Brit comfortably took the chequered flag in Qatar to follow up his remarkable win in Brazil, narrowing the gap between himself and the Dutchman atop the Drivers’ Championship standings to just eight points with two races left.

Mercedes and Hamilton took a five-place grid penalty at Interlagos to implement a new engine, and the Brit – boosted by the speed advantage – had one of his great drives to climb from P10 to take the win.

Hamilton romped to a comfortable win in Qatar on Sunday while Verstappen impressively climbed from P7 to second-place, but he couldn’t catch his adversary and the result never appeared in doubt.

The seven-time world champion admitted he was grateful for the points in both the drivers’ and constructors’ standings after teammate Valtteri Bottas was forced to retire following a puncture.

“It was pretty straightforward, it was lonely out front,” Hamilton told Jenson Button on Sky Sports F1 after the race.

“I enjoy those races where you’re battling through but we just needed the points today.

“I’m just grateful for those points. To be at this point of the year with two back-to-back wins is special. It feels good, I’m really happy with the car and feel fitter than ever.”

The isolation felt by Hamilton at the front of the race stemmed from Verstappen’s five-place grid penalty for not seeing double-waved flags in qualifying.

The Dutchman dropped from second to seventh as a result, but stormed back to P2 early on and even secured the additional point awarded for fastest lap.

“I know it’s going to be difficult to the end but that’s quite nice, I enjoy it,” Verstappen told Button.

“This track is enjoyable to drive and the degradation was a challenge, so it’s cool. I feel good, it’s going to be a tight battle to the end.”

The result means Hamilton is now just eight points behind Verstappen in the championship standings ahead of the final two races which are believed to both favour the straight-line speed of Mercedes.

In the constructors’ championship, Mercedes still have an advantage by five points, despite Bottas’ retirement.

Have your say on whether Verstappen will dethrone Hamilton as world champion below in Express Sport’s latest F1 poll.