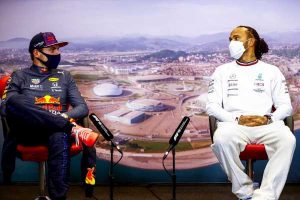 The British driver has spoken about their interactions away from the sport and he describes them as ‘limited’. It’s not surprising due to where their rivalry has taken them this season with the title lead exchanging hands and the pair crashing twice.

However, Hamilton says their relationship hasn’t changed this season: “Not a huge amount to say. There is limited communication, I think maybe some of the drivers hang more than others do.

“I wouldn’t say I particularly hang closely with anyone particularly here. Last year we would see each other at the track and we would say hi, we do the same this year. It’s no different for me, personally.”

Verstappen leads the title race by six points with six races to go and Hamilton’s next opportunity to take back the lead comes on Sunday at the US Grand Prix. The 36-year-old is excited to get out on the track.

“It is a place of great, great memories, and a great track for wheel-to-wheel racing,” added Hamilton.

“It is going to be very tight and close between us all. It is important to win every race somehow and maximising our points. It will be incredibly difficult and there will be moments where we can edge out Red Bull.

“A lot can happen in these six races so I am going to take one race at a time and give it everything I have got.”