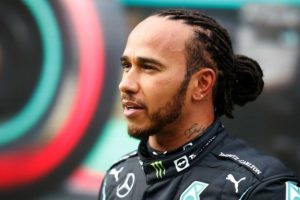 Lewis Hamilton will need to emulate the fighting spirit of his old Mercedes team-mate Nico Rosberg in order to pip Max Verstappen to this year’s Drivers’ Championship crown. The Brit still has every chance of sealing a record-breaking eighth world title and cementing his status as one of, if not the greatest Formula One driver of all time.

However, he currently finds himself adrift of Verstappen in the standings with just six races left to stamp his championship-winning authority over his Red Bull rival.

The latter stole top spot from Hamilton at Sunday’s Turkish Grand Prix with a second-placed finish to claim a seven-point lead at the top of the order.

Hamilton looked set to complete the race without stopping for new tyres, but was eventually called into the pits with only a few laps remaining.

He was ultimately forced to settle for fifth place, handing Verstappen the all-important advantage as the season nears an exciting and unpredictable climax.

The battle for supremacy between Hamilton and Verstappen has been throwing up shades of 2016, when the Mercedes man went toe-to-toe with Rosberg for the end-of-season honours.

The pair were childhood friends but their relationship quickly turned bitter when they emerged as the two standout contenders for that year’s championship title.

A number of on-track tangles plagued their own efforts against one another, much like the incidents at Silverstone and Monza this year involving Hamilton and Verstappen.

Rosberg eventually came out on top to claim his first and only Drivers’ Championship triumph before retiring from the sport in a surprise decision at the end of the season.

It seems as though Hamilton will need to take a leaf from his old foe’s book in order to snatch victory in this year’s battle for glory with Verstappen.

Rosberg found himself in a similar situation back in 2016, with the German driver sitting two points behind Hamilton with just six races to go.

However, an incredibly consistent and fruitful run-in saw him pip the Stevenage-born racer by just five points on the final day of the season in Abu Dhabi.

Hamilton’s chances of winning the title were damaged by his retirement in Malaysia, where he was forced into an early bath after an engine failure.

Rosberg went on to claim a win and four second-place finishes from the last five Grands Prix to see him edge Hamilton in a dramatic final chapter to the tale.

Fast forward to now and Hamilton has been struggling for consistency as of late, failing to finish on the podium in three of his last eight races.

The ability to perform under pressure and produce top-two results on a weekly basis will be crucial in deciding this year’s title fight, with Hamilton able to surpass the great Michael Schumacher with another championship triumph.

The Mercedes talisman recently declared that he is yet to feel the pressure despite the intensity of his battle with Verstappen, insisting that he is experienced enough to handle moments of tension and stress behind the wheel.

“I don’t really have any worries, I’m able to just arrive here and love doing my job,” said Hamilton.

“We’re just taking things one week and one race at a time. We’re always trying to elevate, and I’ve spent plenty of time speaking to the team about how we can advance and improve.

“I’ve been doing this for a long time so I’ve found ways to get me on course and I know what can also put me off course. I know what makes me tick and I will stick to them.”