Lewis Hamilton: Jenson Button’s secret to beating Formula One superstar: ‘Worked for me!’ 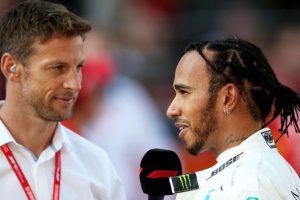 Max Verstappen started the British Grand Prix from pole position after winning Formula 1’s new trial sprint race on Saturday. But following a collision with Sir Lewis on the first lap, he was sent flying into the safety barrier, bringing an early end to his race. Many have tried and failed to better Sir Lewis, with only Button and Nico Rosberg ever outscoring him in the same machinery.

And the former McLaren driver revealed exactly how he did it, admitting he persuaded their team to build a car that was more suited to his style.

He said in May: “I don’t know about playing mind games with him. The important thing for me was to get a team behind me.

“I jump into a car and if it isn’t suited to my style then it just doesn’t work for me.

“I’m not one of those drivers. I need a car developed around me and the team support around me to develop it in my direction.

“That’s what I did, and it worked for me. I think that mentally hurt Lewis a little bit at certain points of our time together.”

Despite this, Button did not believe the same tactics would work for Valtteri Bottas today.

He added: “When Lewis probably has an issue or a bad weekend now, he will go away, think about it and come back.

Button has previously dubbed Verstappen as “the most talented” driver in F1.

He said before the Spanish Grand Prix: “He’s immensely talented. For raw talent, he’s probably the most talented [in history].

“I know a lot of people won’t agree with me on that.

“The most complete driver out there in terms of experience and the way they go about their racing is Lewis Hamilton. But for raw talent, I think it has to be Max.

“So Red Bull are not going to want to let him go.”

The Dutch driver thankfully got out of his car and walked away from the crash at Silverstone – he was later seen getting medical attention from an ambulance crew.

The race was red-flagged as a result and could be a huge blow for Verstappen’s 33 point lead.

Sir Lewis was heard saying: “He turned in on me man. I gave that guy space.”

But Red Bull boss Christian Horner was left furious by the incident.

He told Channel 4 that Sir Lewis was “completely out of order to stick a wheel up the inside”.

He adds: “Everyone who’s driven that corner knows you don’t stick a wheel up the inside at Copse. He’s put him in the fence. Thank god he’s not been hurt. It was a desperate move.

“You do not stick a wheel up at Copse, one of the fastest corners in the world. That’s just dirty driving.

“It’s now with stewards and we hope they deal with it appropriately.”