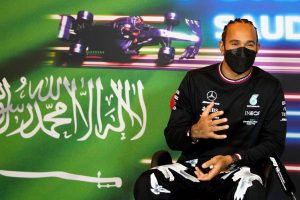 Lewis Hamilton is not pleased about having to race in Saudi Arabia and called the country out over its oppressive LGBTQ+ laws.

Same-sex marriage is illegal in the Arab country, as is any homosexual act, and can be punished by flogging or imprisonment, while capital punishment can also be used.

Mercedes ace Hamilton, along with fellow racer Sebastian Vettel, has been outspoken in the past about cultural and social issues and did not shy away from the subject on Thursday.

The Briton said he had received a warm welcome in Saudi Arabia and that he was grateful for that, but didn't hesitate to say how he felt about being in a country with such oppressive laws.

"Do I feel comfortable here? I wouldn't say I do," he told reporters in Jeddah.

"I will wear [the 'Pride' helmet] again here and in the next race. If anyone wants to take time to read what the law is for the LGBTQ+ community, it is pretty terrifying."

Hamilton's comments come as Amnesty UK's head of campaigns Felix Jakens called on the big names in F1 to speak out about the subject.

"The Jeddah Grand Prix is yet another key moment in the Saudi authorities’ wider sportswashing effort," he said.

"It's important that the glamour of F1 is not allowed to divert attention from the plight of Saudi women's rights defenders who risk imprisonment for their work, nor from the struggles of Saudi LGTBI people who live in a country where same-sex relations are illegal and punishable by flogging or imprisonment.

"We're calling on Formula One – the drivers, their teams, senior executives – to be prepared to speak out about human rights in Saudi Arabia, helping to undo some of the intended sportswashing of this event."

Hamilton said he would be wearing his helmet adorned with rainbow colours in the final two races of the season, after debuting the design last time out in Qatar.

And Vettel will also be showing off a Pride symbol courtesy of a pair of trainers with a rainbow design.

Aston Martin communications chief Matt Bishop hailed Vettel as "an LGBTQ+ ally" as he shared the news with his Twitter followers.