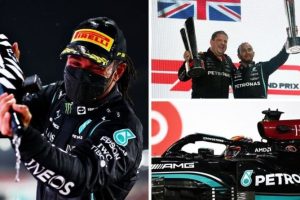 Lewis Hamilton took to social media to show the Brit has jumped back in the simulator to fine-tune his skills ahead of the climax to a dramatic Formula 1 title race. The 2021 season has been one of the greatest years in the sport’s modern history thanks to the titanic world championship battle between Mercedes’ Hamilton and Red Bull’s Max Verstappen.

The Brit comfortably took the chequered flag in Qatar to follow up his win in Brazil, narrowing the gap between himself and the Dutchman atop the Drivers’ Championship standings to just eight points with two races left.

Mercedes took a five-place grid penalty at Interlagos to implement a new engine, and Hamilton – boosted by the speed advantage – had one of his great drives to climb from P10 to take the win. This was made even more impressive by the fact he had already been disqualified from qualifying.

Hamilton romped to a comfortable win in Qatar on Sunday while Verstappen impressively climbed from P7 to second-place, but he couldn’t catch his adversary and the result never appeared in doubt.

The seven-time world champion is famously not the biggest fan of simulators, as he is a firm believer that the experience does not reflect a real racing environment and so avoids it where possible.

However, Hamilton shared a photo on Wednesday from the simulator as he is getting to grips with the new Jeddah Corniche Circuit ahead of the inaugural Saudi Arabian Grand Prix.

The season-long title battle has seen Hamilton and Verstappen battle at the front of the grid, often getting too close for comfort.

Hamilton took Verstappen out of the British Grand Prix – with the 36-year-old going on to take the chequered flag – while the Dutchman collided with the Brit at the Italian Grand Prix, forcing the title protagonists to both retire.

There have been numerous off-track disputes, from teams appealing for penalties – or lack of them – to threatening to protest the legality of the opposition’s car.

Hamilton insisted earlier this week that he wants to secure a record eighth world championship without any controversy or collisions, which have become a theme of the epic and tense 2021 season.

If the Brit delivers, he will stand alone as the most successful driver in F1 history as he is currently tied with Ferrari legend Michael Schumacher on seven.

When asked about his strategy for the final two races, Hamilton said: “I don’t feel too big or too successful to avoid a fight. I know that sometimes you have to take this path.

“You have to be the clever one. Sometimes you lose points, but it’s not just about me. I have 2,000 employees behind me.

“A selfish act where I stick to my point and don’t finish the race could cost my whole team the bonus payments at the end of the year. And then create more work on the damaged car.”

Hamilton is now just eight points behind Verstappen in the championship standings ahead of the final two races which are believed to both favour the straight-line speed of Mercedes.

In the Constructors’ Championship, Mercedes still have an advantage by five points, despite Valtteri Bottas’ retirement in Qatar.

The championships will therefore be decided in the final two races, with the Saudi Arabian Grand Prix on December 5 followed by the Abu Dhabi Grand Prix at the Yas Marina Circuit on December 12.