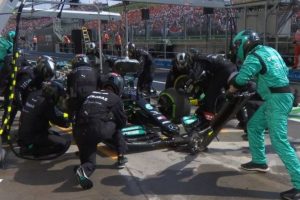 Lewis Hamilton has been constantly talking on team radio after dropping down outside the points following chaos at the start of the Hungarian Grand Prix. Rain before the start of Sunday’s race had caused a headache for all teams on the grid.

And that lead to chaos after the lights went out as Valtteri Bottas struggled for pace off the line.

He found himself stuck behind Lando Norris heading into the first corner, and was too late on the brakes before crashing into the McLaren driver.

That then led to both Red Bull drivers being hit as Hamilton came away in first with carnage behind him.

The race was immediately red flagged with drivers returning to the pits, but Bottas, Charles Leclerc, Lance Stroll and Sergio Perez were all confirmed as retirements after the first-lap chaos.

McLaren then confirmed that Norris wouldn’t be able to join the restart before the drivers returned to the track.

They were all getting ready for a standing start but it soon became clear the track was drying quickly and all drivers except for Hamilton came into the pits at the restart in bizarre circumstances.

A lap later and Mercedes realised they needed to bring Hamilton in for dry tyres, but that dropped him to the back of the pack.

He was going to be the fastest man on the track, but he was finding it more difficult than he expected to get past the likes of Haas and Alfa Romeo.

And the seven-time world champion sounded exascerbated on team radio at the situation he found himself in.

“I don’t really know what to say guys,” he said.

“I can’t get close to people.”

A few laps later and Mercedes appeared to realise the plan with Hamilton wasn’t working and brought him in again for a set of hard tyres.

And the undercut proved powerful once again as he aced his out lap to come out in front of both Daniel Ricciardo and Verstappen after they both pitted.

The defending champion soon began racing through the pack, but was still some distance away from race-leader Esteban Ocan.

Verstappen though was still carrying serious damage from the first-lap incident and was struggling himself to find a way up into the points.