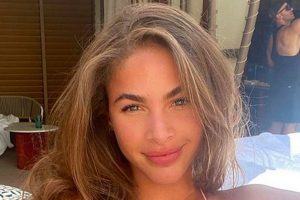 Formula 1 racer Lewis Hamilton has been cosying up with stunning model Camila Kendra, and she has been spotted wearing the Brits shirt.

Hamilton currently sits at the top of the Drivers World Championship standings after catching and passing his Dutch rival Max Verstappen.

And he remains winning out of his car, with him seemingly getting closer to the model.

Kendra recently split from her ex, Tyler Cameron, from the US show The Bachelor after the pair spent eight months together.

And now Kendra has uploaded a photo onto her Instagram page inside the 36-year-old's home and a candid pic wearing one of Hamilton's plaid shirts.

Kendra, who was born in the Dominican Republic, is currently staying at Hamilton's home in Colorado.

The 22-year-old is an up and coming model based in the USA.

And she has previously claimed that athletes such as Cristiano Ronaldo footballers have slid into her Instagram DMs in the past.

Hamilton, on the other hand, has had been linked to a series of romances after he broke up with Nicole Scherzinger back in 2015.

Do you think Hamilton will win the Drivers Championship this year? Let us know in the comments section

However, a source close to Hamilton has told The Sun that they are only friends.

The insider said: "They’ve been friends for a few years — that’s why she’s staying at his house and wearing his shirt."