“You want to look back and say I was a part of something much bigger than myself, than my team, than the sport, and I did it with a whole group of people and a lot of force against us, but also a lot of force because there was many of us pushing in the same direction”

Lewis Hamilton has just become Formula 1’s new record holder for race victories and could, within a space of the next fortnight, also equal the record number of championships with a seventh world title.

The accolade of the most successful driver in the sport’s history awaits but 2020 is about more than just simply sporting achievement for F1’s leading star, as Hamilton explains in an exclusive interview with Sky Sports News.

As part of Black History Month, Hamilton spoke at length to Mike Wedderburn about the powerful stand he has taken against global racial injustice and the Mercedes driver’s desire to help make his own industry a more diverse place into the future.

As Hamilton, F1’s first and only black driver, explains: “If I stop talking about it, if I stop taking a knee at the forefront, at the pinnacle of motorsport, if I stop wearing this mask (Black Lives Matter) reminding that this is still an issue, then it will just go back to normal and this will be in 10, 20 years the same layout that it’s always been. 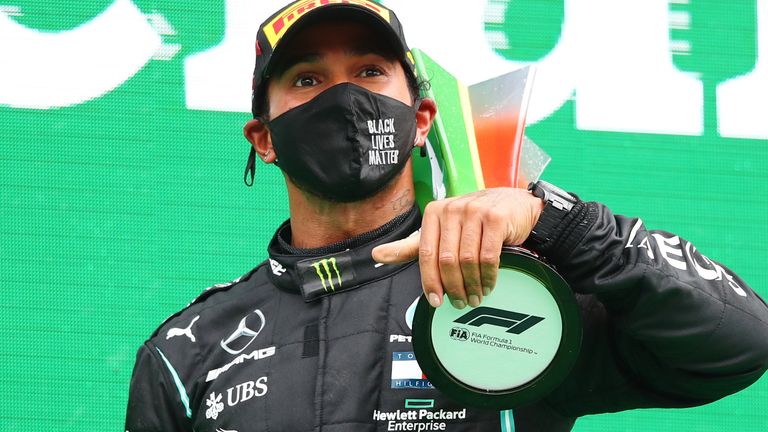 “And the access for minorities and people coming up will still be the same.”

Lewis Hamilton: My Race airs in full for the first time on Sky Sports News at 9.30am on Friday morning and then throughout the day on the channel.

The 25-minute interview will also air on Sky Sports F1 and Main Event over the weekend, and be available to watch on Sky Sports On Demand and YouTube.

“I want to be a part of the solution, shifting it for the future,” says Hamilton in the interview conducted at last week’s Portuguese GP, where he won for a record 92nd time in F1. 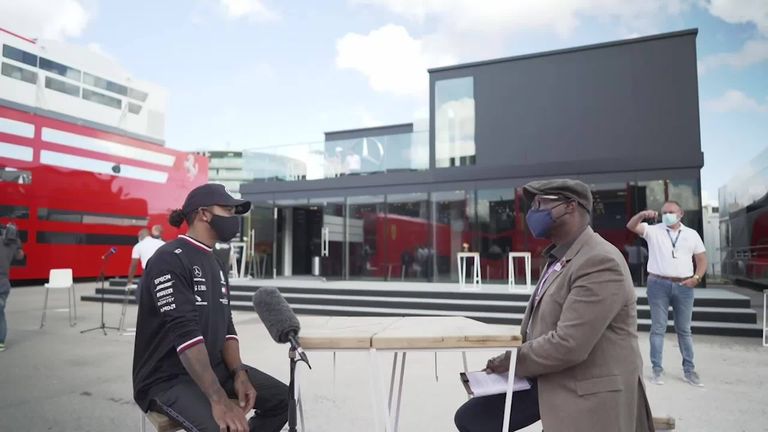 “Because I’m winning all of these races, but it doesn’t actually mean anything unless you do something with the platform that it then provides you. I think all these years I’ve been… I feel like things happen for a reason in some ways and I think all of us are probably looking for what our purpose is and for me, I’ve been winning these races and succeeding and wondering, what does it all mean?

“What am I going to do with this? And this came round this year and I’m really, really proud, grateful to be a part of the big fight that everyone out there is fighting for.” 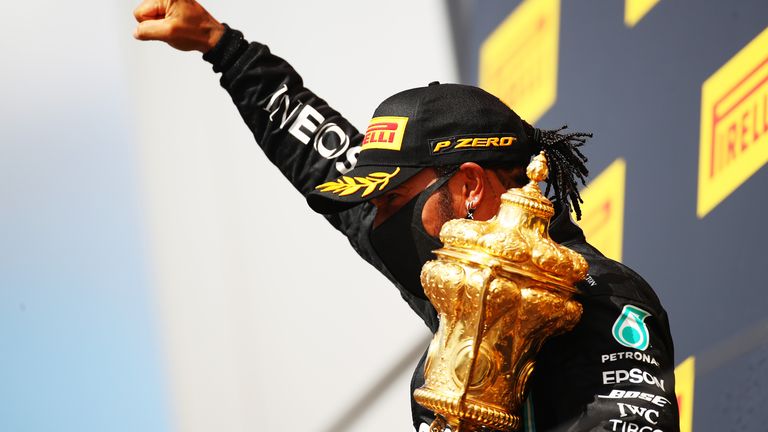 The killing of George Floyd by a white police officer in the United States in May sparked Black Lives Matter demonstrations across the world, with Hamilton – who told Wedderburn that watching the video “brought a lot of emotion that I had suppressed since the age of five” – a vocal supporter of the movement before, and during the 2020 Formula 1 season.

As well as frequently sharing messages on his social media platforms, Hamilton attended a solidarity march in London in June and has worn ‘Black Lives Matter’ T-shirts for F1’s pre-race anti-racism demonstrations, while also performing the Black Power salute after winning his first race of the season in Austria in July. He has been one of sport’s most prominent and passionate voices in the fight against discrimination, but insists it was only natural.

“Honestly, it was really easy for me, because that’s just how I’ve always been since I was a kid,” he said. “I’ve never been afraid of standing up for what I believe.

“Whilst at times in my life I’ve been pushed to keep my mouth shut, I don’t think that inspires anyone and that doesn’t inspire progress.”

Hamilton has tried to bring attention to other instances of police brutality and racial violence, and added: “For me, when I felt those emotions, I don’t want my niece and nephew to feel what I feel, as mixed-race kids, growing up.

“We just have to continue with it, we have to keep going. It’s like anything out there, the news happens and then it just dies a quiet death and we can’t allow that to happen.” 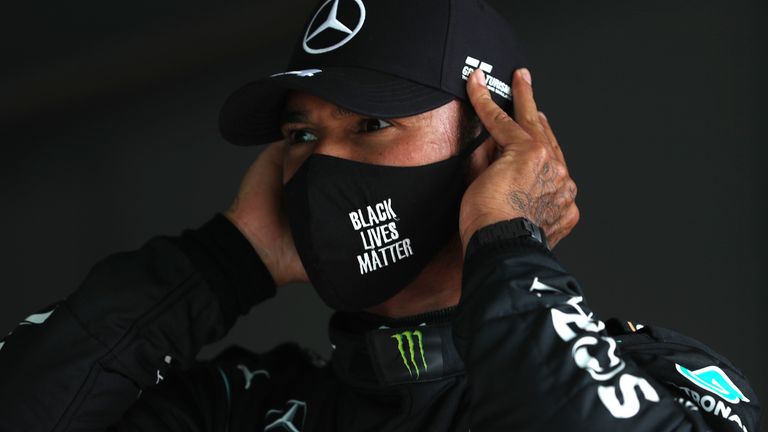 F1’s six-time champion started the Hamilton Commission back in July, in partnership with the Royal Academy of Engineering, in a bid to increase the number of black people in motor racing.

He said the early stages of the research have been “interesting”, and explaining what he hopes to achieve, stated: “What I notice is, it’s not something you can just change over time. It’s not about firing people and swapping them for people of colour – it’s not about that. It’s really understanding what the barriers are.

“I’ve got an amazing group of people that are on this commission. Some are in politics, some are on the ground in black communities, some are in education. At the end of the day, it does come down to education. The goal is not to do something short-term, it’s about setting something up and providing a recommendation for these different businesses, these companies that are here, in how they can go about improving the diversity within their own organisations.

“It has been great to see the response, particularly from Mercedes. I’m most impressed with [them] out of the whole sport. Naturally you can say that’s because I’m there with them, and we’ve had very difficult conversations.

“The goal at the end is to have a sport that represents the outer world, which in my opinion it currently doesn’t.” 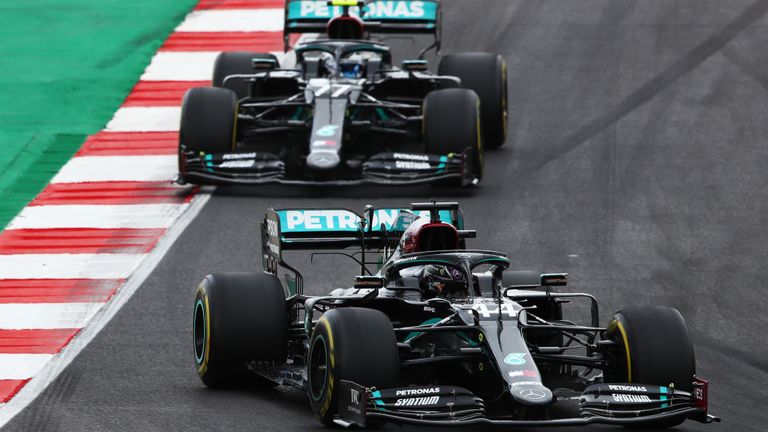 Hamilton also said he hadn’t been listened to regarding his calls for more representation in the paddock in the past.

“It’s not like that I have not spoken about it before, the lack of diversity within my sport,” said Hamilton, who joined the grid in 2007.

“But it’s never been heard. No one has ever listened. No one has ever cared to do anything about it, do the research. And I thought me being here would be enough and hopefully inspire some kids coming up, but it is an expensive sport.

“But when I talk about diversity, I’m not talking about drivers. That’s probably the last part of the end of the straw. It’s all the other great jobs and opportunities there are here.”

Keep across all our features, news stories and video content on Sky Sports News and our Sky Sports platforms. Check out the latest Black History Month content here