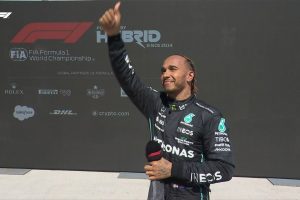 Lewis Hamilton has fired a warning to Max Verstappen and Charles Leclerc, claiming Mercedes are “getting closer” to the fight at the front after a podium at the Canadian Grand Prix. Hamilton said his podium was “overwhelming” but stressed the team “will be in the fight” with the leaders soon.

He said: “We’ve had such an awesome crowd here this weekend. It’s quite overwhelming to get this third place. It’s been such a battle this year with the car and as a team but we continue to stay vigilant and focussed, never giving up and it’s something I’m so proud of and inspired by.

“They are a little bit too quick for us at the moment I was giving it everything, But we are getting closer. We’ve just got to keep pushing and eventually hopefully we will be in the fight with these guys… Our pace was quite good particularly in the second phase of the stint.

“We did a lot of work back in the simulator but also here to get the set-up right so honestly I’m ecstatic. I didn’t expect this coming into the weekend.”

Speaking on team radio after the race, Hamilton said: “Great, great effort guys. Thank you so much. The car was a little bit better today and we got something here. Let’s keep pushing.” The result is Hamilton’s best finish since the Bahrain Grand Prix at the start of the season.

Hamilton benefited from Sergio Perez’s early retirement to jump into a podium position. Charles Leclerc was also out of contention after picking up a grid penalty for an engine replacement ahead of the race.

It looked as if Russell could challenge for the podum by one-stopping but Mercedes decided to pit him late on, ending any threat for Hamilton.

Speaking after the race, Mercedes team principal Toto Wolff claimed the team were “quicker” than the frontrunners at the end of the race, but stressed the team still had more to do before they could challenge for wins.

He said: “They were both very good and they were on different set-ups and different rear wing settings. We showed some pace today.

“Before the safety car came out at the end we were actually quicker than Sainz. You’re picking out a few laps and saying, ‘yeah we are back’ but I don’t think we’re there yet. We need to keep on working.”