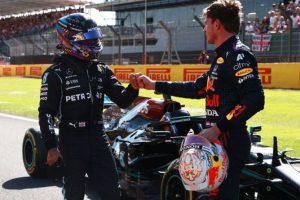 Lewis Hamilton has admitted to one of his biggest fears in the epic title battle with Max Verstappen. Just eight points separate the Red Bull and Mercedes drivers with only two races to go in one of the most pulsating seasons in the sport’s history.

Such is the pair’s desire to become world champion, they have collided on track on multiple occasions in 2021.

The pair touched on the first lap of the British Grand Prox during the summer, which saw Verstappen fly off the track into the barrier.

The drivers then collided at the Italian Grand Prix in September, which saw both men taken out of the race.

After an unusually long pit-stop, Verstappen dropped from second place to 10th, and a short time later his Red Bull was colliding with Hamilton’s Mercedes — an incident which ended with the Dutchman’s car on top of the seven-time world champion’s.

The Sao Paulo GP earlier this month saw the Briton and Dutchman almost collide again, after Verstappen failed to make a corner and ran Hamilton off the track on lap 48.

Other instances have seen Hamilton have to back down in order to avoid a collision with the 24-year-old, and when asked during an interview if backing down is seen as a weakness, Hamilton stressed the importance of thinking of the team ahead of himself.

“A selfish act where I stick to my point and don’t finish the race could cost my whole team the bonus payments at the end of the year. And then there is the work on the damaged car,” he explained.

“When you’re on the outside, it’s almost always the more sensible option to pull back so you can finish the race.”

The seven-time world champion defended his position during the crash at the British GP, which some deemed him responsible for.

“On the inside, there were situations where I clearly saw myself as being in the right, like at Silverstone, for example. Look at the pictures again: My front wheel was at the same height as his front wheel”, he added.

“It wasn’t that my front wheel was at the corner entrance level with his rear wheel. If I had acted like Max in Brazil in this situation, that is, had stayed on the gas, left the track and held the position, how would that have turned out? I don’t feel too big or too successful to avoid a fight.

“I know that sometimes you have to take this path. You have to be the clever one. Sometimes you lose points. But it’s not just about me. I have 2,000 employees behind me.”

Their battles on track have made for compelling viewing, and the pair are set to do battle at the inaugural Saudi Arabia GP on December 5 and the final race of the season in Abu Dhabi a week later.

Hamilton holds the record for the most race wins in F1 history, with 102 victories to date after storming to victory at the Qatar Grand Prix.

He also holds the record for the most pole positions and podiums, as well as equalling Michael Schumacher for championship titles with seven to his name.

Now in pursuit of an eighth, he is on the brink of history, if he can overcome Verstappen over the final two races of the campaign.