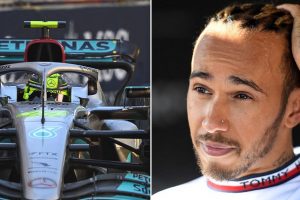 Formula 1’s governing body has vowed to take action against porpoising on the advice of its medical team – just days after Lewis Hamilton suffered chronic back pain in the Azerbaijan Grand Prix.

The seven-time world champion needed help to get out of his Mercedes which had bounced up and down at high speed throughout the race. Mercedes ran their machines close to the ground in Baku to produce lower downforce, but the move exaggerated the bouncing. A number of drivers, including Hamilton’s teammate George Russell, former Mercedes driver Valtteri Bottas and McLaren’s Daniel Ricciado, have spoken out against the problem and the potential health risks.

And the FIA, which sets the sporting regulations in F1, has issued a new technical directive in a bid to ease the stress on drivers’ bodies. However, it will not necessarily help the Silver Arrows, who could be required to raise the ride heights of their cars. While that would ease the strain on their drivers, it could also see them lose performance at a time when they are already well off the pace compared to Red Bull and Ferrari.

“I don't think this helps, in the short-term, Lewis Hamilton at all," said Sky Sport F1 reporter Craig Slater following the announcement of the news. “What they're saying is that you must not allow your car to vibrate like this.

“Teams that don't have a problem with it won't have to make any changes. Teams like Mercedes, whose car bounces up and down, are effectively going to have to raise the height of the car, that will stop the bouncing and it will also slow the car down. So, actually, in the shorter term this doesn't look like it's going to help Lewis Hamilton or Mercedes at all.”

The FIA statement, issued ahead of this weekend’s Canadian Grand Prix, read: “The FIA, as the governing body of the sport, has decided that, in the interests of safety, it is necessary to intervene to require that the teams make the necessary adjustments to reduce or to eliminate this phenomenon [of porpoising].

“The FIA has decided to intervene following consultation with its doctors in the interests of safety of the drivers. In a sport where the competitors are routinely driving at speeds in excess of 300km/h (186 mph), it is considered that all of a driver’s concentration needs to be focused on that task and that excessive fatigue or pain experienced by a driver could have significant consequences should it result in a loss of concentration.

Who will win the Canadian Grand Prix? Have your say in the comments section below.

“In addition, the FIA has concerns in relation to the immediate physical impact on the health of the drivers, a number of whom have reported back pain following recent events.”

The statement continued: “A Technical Directive has been issued to give guidance to the teams about the measures the FIA intends to take to tackle the problem.

“These include closer scrutiny of the planks and skids, both in terms of their design and the observed wear, and the definition of a metric, based on the car’s vertical acceleration, that will give a quantitative limit for acceptable level of vertical oscillations.

“The exact mathematical formula for this metric is still being analysed by the FIA, and the Formula One teams have been invited to contribute to this process.”