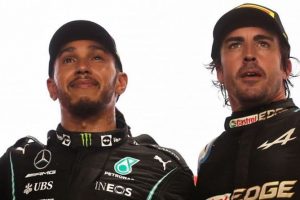 Fernando Alonso has been hailed as the best driver in Formula 1 after the Spaniard secured a memorable podium at the Qatar Grand Prix. The 40-year-old finished third behind winner Lewis Hamilton and Max Verstappen at the Losail Circuit.

In doing so, Alonso ended his seven-year absence from an F1 podium on Sunday, finishing in the top three for the first time since a P2 finish at the Hungaroring in 2014 while he was with Ferrari.

Alonso soon made a move to McLaren in 2015 before originally retiring from the sport in 2018 only to return this season.

And fellow F1 legend and multiple world champion Alain Prost, a director at Renault-owned Alpine, is pleased Alonso did return – and even labelled the Spaniard ‘the best driver in the field’.

“For me, he is the best driver in the field,” the 66-year-old told Auto Motor und Sport in Qatar.

“The overview of the race he has is unbelievable, as is his feel for the tyres, the statements he makes about the car and how he feeds the engineers.”

When Renault announced their intention to sign Alonso ahead of his return to F1, Prost admitted he was concerned about the Spaniard’s prickly reputation.

“Fernando has always told me that he has become a different person, and I have to say that he was right,” the Frenchman added.

“He is totally at the service of the team, and that is very good for the team.”

The two-time world champion was clearly proud of his third-place finish after going 104 Grands Prix without a podium.

He proudly told Spanish broadcaster DAZN: “With all due respect, I am sharing the podium with Hamilton and Verstappen, not anyone else.”

Alonso managed to make a one-stop strategy work despite the degrading track conditions, steering his Alpine home after starting P3 on the grid following a number of penalties to rival drivers.

Hamilton took the chequered flag at the inaugural race in Qatar, comfortably leading from the front to take his 30th win at a different track.

Verstappen, who suffered a five-place grid penalty for ignoring yellow flags during qualifying, quickly climbed through the field to finish behind his title rival, taking the extra point for fastest lap to boot.