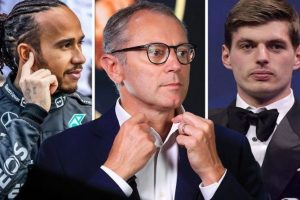 Lewis Hamilton and Max Verstappen will not have such a big gap between themselves and the rest of the field next season, according to the F1 CEO Stefano Domenicali. The pair dominated the 2021 season and finished over 160 points ahead of Valterri Bottas in third.

While Domenicali is hoping for another titanic duel between the two drivers, he also expects the rest of the pack to be much closer to the Brit and the Dutchman this year.

This is likely as new rules and regulations should ensure that the teams are more competitive with each other in 2022.

In a conversation with Sport1.de, Domenicali said: “Of course, I hope that the duel will continue.

“If you ask me if we will see an extremely close field from the first race, I think not. But with the restrictions in car development and the upper limit of the budget, the gap should close faster.”

All teams will need to adapt to a new set of regulations next year, with a new breed of F1 cars set to be introduced to the public when pre-season testing gets underway next month.

JUST IN: Lewis Hamilton could get his wish as F1 boss hints 29-year wait may be over this season

The new rules are designed to reduce the level of aerodynamic downforce on cars with the intention of reducing the effect of dirty air in order to promote closer racing.

Red Bull and Mercedes will be desperate to avoid slipping down the pecking order, with the widespread nature of the regulation changes potentially able to shake up the grid next year.

The 2022 regulations are set to significantly simplify the top-body aerodynamics.

That means less downforce from the firmly-regulated front and rear wings, which are tightly-prescribed in order to eliminate the outwash aerodynamics that have made F1’s turbulence problems worse over the past decade or so.

In order to enable better racing and remove the prospect of dirty air having an impact on overtaking, the aerodynamic phenomenon known as ‘ground effect’, will help to reduce the “catastrophic downforce loss.”

“The cars should enable the drivers to drive closer to one another and thus duel even more intensively with one another,” he added.

“If you ask me whether we’ll see an extremely close field from the first race on, I don’t think so.

“But due to the restrictions in the further development of cars and the upper budget limit, the gap should be closed more quickly. In any case, I’m really looking forward to the new cars.

“I was told that some of them should look different than the model we presented at Silverstone. I am curious myself.”

Domenicali commented on the possibility of F1 being staged in South Africa after calls from Hamilton for the sport to return to Africa.

“A comeback in Africa – whether in the north or south – would be great. How quickly this works will also depend on the situation around Covid,” he said.

“We must not continue to underestimate the corona pandemic. We could also have to adjust the calendar again in 2022.”