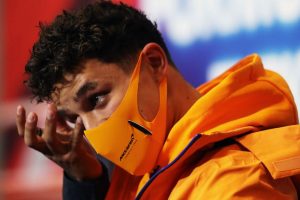 Lando Norris has admitted that some F1 fans are "very creepy", as he has discovered since breaking onto the scene with five podium finishes across the last two seasons.

The 22-year-old Brit has opened up on his early years as a well known sporting figure by describing how he has accepted that certain things will be thrown your way by the public.

In hitting out at those who have been disrespectful to his friends and family online, Norris has said that not all motorsport fans are as pleasant as they might seem.

Norris, who doesnt mind the level of attention he gets outside of social media, has described the 'creepy' world of F1 Twitter, a platform on which he has 1.5 million followers.

In a chat with EPSN, Norris said: "I think the one bad thing is just personal life with friends, people who through no fault of their own get put into the spotlight sometimes because of being seen with me or me following them on social media or something."

Adding of 'self-styled detectives' on social media: "There are. It's very, very weird.

"Honestly, it's very creepy what some people do. The time they spend trying to investigate things or people or whatever.

"I just laugh and find it very funny, but it's very weird. It's just odd."

Does Lando Norris have what it takes to become a Formula 1 Champion? Tell us in the comments section

Norris went on to say that the 'disrespectful' abuse of his friends is unacceptable, and how that is the only thing he hates about being an F1 superstar.

Norris currently sits a respectable fifth in the overall Drivers' table having racked up 153 points with two races remaining.

The youngster will be hoping to end on a high in Saudi Arabia and Abu Dhabi, with Lewis Hamilton and Max Verstappen battling for Championship glory.

Back in September, F1 icon Hamilton, who has won a joint-record seven World Drivers' Championship titles, gave his fellow Brit some advice after a thrilling Russian GP.

"Lando did such an amazing job, he had incredible pace," he said.

"He's doing such a great job for McLaren and it was obviously very bittersweet to see my old team ahead. They're doing so well, obviously they won the last race.