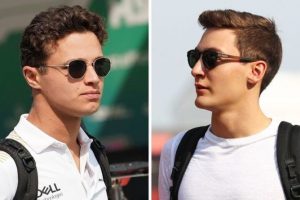 McLaren’s Lando Norris has hit out at Pirelli after he and several other drivers suffered tyre failures during the Qatar Grand Prix saying it “shouldn’t happen” in motorsport. Mercedes’ Valtteri Bottas was the first to suffer a puncture on lap 34 whilst running third after attempting to pull off a one-stopper in Doha.

The Finn was quickly followed by McLaren’s Norris and Williams team-mates George Russell and Nicholas Latifi, with each driver insisting there was no indication the tyres would fail.

Despite Russell taking a more diplomatic approach in explaining that Williams had “anticipated” tyre failures, Norris admitted it could’ve been “much more dangerous”.

When asked if Pirelli should have informed the drivers ahead of the race, Norris responded: “No, it just shouldn’t happen. If there’s a wall there or something, it could’ve been much more dangerous.

“You don’t expect the tyre to blow up, especially not on the hard tyre. We weren’t even that far into the stint, 20 laps or something, and the tyre should do a lot more than 20 laps.

“Every track, you look after the tyres because the tyres wear out a bit but you don’t expect it to suddenly let go completely.

JUST IN:
Hamilton’s disagreement with the FIA after Verstappen controversy

“[It was] quite dangerous for a lot of people today. It shouldn’t happen.

“They should make the tyres better. It’s dangerous for us as drivers. We risk a lot every time and if we can’t just drive a Formula 1 car around the circuit, what can you do?

“I didn’t even do a very long stint, 20 laps, 25 laps, whatever. I should still be able to drive the circuit.”

Russell meanwhile, who is due to partner Lewis Hamilton in 2022 at Mercedes, explained Williams felt it was inevitable their tyres would suffer due to their speed.

“[There was] no warning, but we actually anticipated that prior to the race,” explained Russell.

“It was just the outside shoulder, that front-left that was a limitation, probably 10 centimetres on the outside front-left, and it would literally just go at some point.

“The reason for it is that we just didn’t have enough pace in the high-speed corners leading onto the straights.

DON’T MISS:
FIA’s Michael Masi explains why he handed Christian Horner a warning
Red Bull’s Christian Horner latest to be summoned to stewards at Qatar
Lewis Hamilton ‘in good stead’ for the title

“Nothing to be disappointed about regarding this puncture. It was a factor of not having enough speed for the rest of the lap.”

“These Formula 1 cars are so fast, tyres wear.

“You go through those right-hand corners, flat out in seventh gear, I don’t know what the exact speed is – 270, 280 kilometres an hour – it’s going to happen.

“For whatever reason, this track is impressive as to how hard you could push, it was relatively smooth, which allowed the drivers to push flat out.

“Probably from my whole F1 experience, this was the race where it was the highest tempo, if that makes sense, in terms of how much you could push.

“That was really enjoyable but obviously it didn’t work out for us.”

Despite rejoining the pack, Bottas eventually had to retire the car after picking up damage attempting to limp back to the pits after the blowout.

“I don’t know really what happened,” Bottas explained. “There was no warning, no vibration, [the] pace was still consistent. The grip was feeling okay. It just happened.

“Initially I thought the wind was getting stronger on the main straight because I felt that the car was sideways.

“Then it was a puncture in the first corner, and obviously in the most unlucky point as well, just after the pit exit.”

Pirelli say they have launched an investigation into the tyre failures and are flying the tyres back to Milan to try and understand what happened.