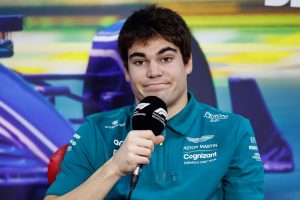 The Aston Martin driver was involved in two contentious incidents towards the end of the campaign with both his then teammate, Sebastian Vettel, and new stablemate, Fernando Alonso.

The first involved Alonso at the United States Grand Prix when his late move to defend position saw the Spaniard hit the back of the Aston, ride up into the air and brush the barrier. Stroll was adjudged to be at fault and was hit with a three-place grid penalty for the following race in Mexico.

Then, during the Sao Paulo Grand Prix sprint race, he performed an even more dangerous manoeuvre when he forced Vettel off the track as he tried to defend.

Neither Alonso nor Vettel were too critical of Stroll, perhaps mindful of the fact his billionaire father Lawrence owns the team. But following the second incident, the Canadian was hit with a 10-second penalty and given three penalty points, which will stay on his licence for a year.

That took him to eight penalty points with only Pierre Gasly, who has left AlphaTauri for Alpine, ahead of him on the naughty boy list with 10. If any driver reaches 12 points, they will be automatically hit with a one-race ban.

Do you think Lance Stroll deserves his place in F1? Have your say in the comments section.

If that wasn’t enough, Stroll has also got himself in hot water for going too fast, in the pit-lane that is.

Given Stroll’s wealth – he is reportedly paid $10million (around £8million) – per year, he won’t have lost any sleep over the punishments. However, like Gasly, he will need to keep his nose clean in 2023 to avoid a race ban.