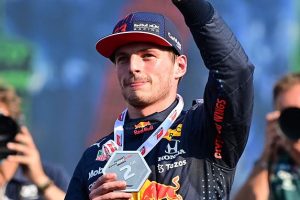 Max Verstappen will look to increase his five-point lead in the title race when he starts on pole for the Italian Grand Prix.

Sprint race winner Valtteri Bottas was forced to the back of the grid due to a fourth engine change of the season.

The Red Bull star therefore has the chance to extend his lead in the championship over Lewis Hamilton, who failed to score any qualifying points and starts the Grand Prix from fourth on the grid.

Follow Sportsmail’s JEORGE BIRD for live Formula One coverage of the Italian Grand Prix, including build-up, lap-by-lap updates and result.

Lewis Hamilton failed to score any points in qualifying and will start in fourth.

Max Verstappen will start on pole as he looks to increase his five-point lead in the title race.

Good afternoon and welcome to our live coverage of the Italian Grand Prix, with the race set to get underway at 2pm.