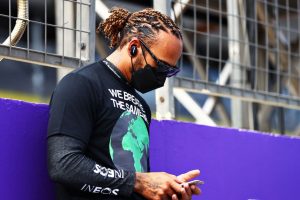 Lewis Hamilton offered a grovelling apology to his Mercedes team-mates after slipping off the track at the Azerbaijan Grand Prix to finish in 15th after leading.

The seven-time world champion had a golden chance to create a lead at the top of the drivers table following a restart, but was seen with smoke coming from his breaks and failed to remain on the track.

Having missed the chance to claim a 99th race win, Hamilton remains second in the drivers' standings with leader Max Verstappen also finishing outside the points having failed to finish.

Minutes before the incident, Hamilton spoke about his intention to be calm: "Got to remember that this a marathon not a sprint – got to be measured about how aggressive we go."

Over the team radio, he then said after the slip: "I'm so sorry, guys."

With a mechanic replying: "Don't sweat it, Lewis."

Giving more detail into the mistake, Hamilton asked his team: "Did I leave the magic on?"

Will Lewis Hamilton bounce back to win the championship? Let us know in the comments

After they told him that he had, he replied: "I could have sworn I turned that off."

In F1, break magic is a mode to change ERS vs Mechanical rear brake effect, heating up brakes and tyres.

"I have to say sorry to Max, it would have been incredible to get that one-two for the team.

"But at the end, it was a fantastic day for us. We were close to retiring the car but luckily we managed to finish the race.

"This is definitely a strong boost of confidence for myself."

READ MORE: 10 worst players ever to play in a World Cup final – including Man Utd flops