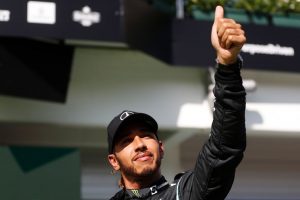 The Mercedes driver will head a 1-2 alongside team-mate Valtteri Bottas with Max Verstappen back in third.

Hamilton's championship battle with the Dutchman continues to hot up and it reached boiling point at Silverstone a fortnight ago.

He and Verstappen clashed, resulting in the Red Bull driver crashing out whilst Hamilton went on to claim the win despite a 10-second penalty.

The fallout continued in the form of an appeal by the Austrian team whilst the incident certainly divided fans.

Those who lean towards Verstappen made their feelings clear as Hamilton was interviewed following his pole position.

Jeers rang out as the Brit gave his thoughts, but he insists such a reaction only serves to motivate him.

"I've never felt so great with the booing, if anything it fuels me so I don't really mind it."

He then added: "It is definitely great having a lockout for our team, it's the first time in a long time.

Both Mercedes will start on the medium tyre whilst the two Red Bulls behind them will begin on the soft compound.

“We wanted to bring a little bit of respect back to the discussion,” he said.

“We understand emotions can run high and it is always a matter of perspective and perception but we felt that line was overstepped.

“Everybody needs to decide whether they want to apologise or not. We felt that the comments made during and after the race and in witness statements and in the meeting itself [with the stewards] were below the belt. But it’s not up to me nor would Lewis want to demand any apologies.”