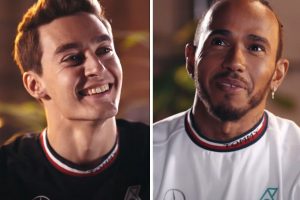 Lewis Hamilton on difficult season for Mercedes in November

Lewis Hamilton left team-mate George Russell in fits of laughter after admitting he once tried on small Japanese boxers he was given as a gift. Hamilton explained the boxers were “so tiny” but hilariously revealed he tried to wear them after receiving them as a present from an adoring fan.

He made the revelation in a Q&A session organised by Mercedes sponsor Petronas. Reading out the question, Russell said: “Has a fan ever done something to you that you really remember?”

Hamilton responded: “I’ve had kisses on my cheeks, I’ve had hugs. A fan gave me a pair of these Japanese boxer shorts. They were so tiny, I was like ‘are they maybe kids ones or something’. I thought it would be funny to try them on but I couldn’t get them on.”

Russell couldn’t hold back the smile after Hamilton made the revelation, giggling in front of the camera. It comes after Hamilton suggested he had noticed “huge buzz” in interest around F1 in recent years.

He recently opened up on another fan exchange with a young female fan while trying to hide in Los Angeles Airport. Hamilton commented: “I’m going to lots of different places and it’s been really beautiful to see how more and more people are embracing the sport. More and more people are excited and passionate about the sport that we’ve all grown up loving.

He added: “I was at the airport in LA and some young girl came up to me and I was all covered up and she was like ‘Are you Lewis?’ She’s like ‘I’m a new fan to the sport. I’m coming out to Austin, I can’t wait, just bought my tickets, coming out with my husband.’ So it’s clearly lifting a lot of people’s spirits as sport does.”

Hamilton has made sure to engage with fans throughout his entire career.

The Mercedes star met Aunty Min, one of his “superfans” in Malaysia back in 2017. She was stunned at meeting her hero, claiming it was her “dream come true” to meet the world champion.

He also enjoyed a spontaneous trip to meet the volunteers working behind the scenes at the British Grand Prix back in 2018. He dropped off crates of beer and enjoyed a laugh with the marshals at a campsite ahead of the race.