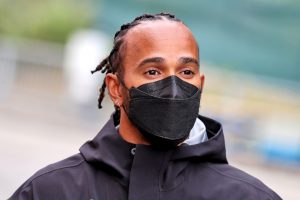 Lewis Hamilton has confirmed that he is in an excellent physical condition going into the Belgian Grand Prix on Sunday.

Hamilton had expressed concerns about potentially suffering from long Covid in the wake of the Hungarian Grand Prix, the final race before F1's summer break.

In Budapest, Hamilton was clearly struggling as he made his way onto the podium after a dramatic race where at one point he had been in last place. He had initially finished in third place, but that was bumped up to second after Sebastian Vettel's disqualification.

In his press conference at the Hungaroring he complained of dizziness and shortness of breath – telltale symptoms for a potential long Covid diagnosis.

However, in his pre-race press conference before the Belgian Grand Prix weekend on Thursday, the 36-year-old looked to alleviate any fears of the degenerative condition and insisted that his rest and relaxation over the mid-season hiatus allowed him to reach peak fitness again.

Asked about his health by a reporter, Hamilton said: "It is not a concern for me.

"I spent the break making sure I am in the best shape and I do feel like I am in better shape moving into the second half of the season.

“I stress the importance of staying safe because we are in this pandemic. As you move around, you see people relaxing more and more but the virus is still around.

"But I will continue to be focused on my health and continue to make sure I get stronger throughout the year.”

The Englishman averted disaster in the first free practice at Spa-Francorchamps on Friday morning as he narrowly avoided crashing into Nicholas Latifi's Williams at the final chicane of the track.

It appeared Latifi did not see Hamilton attempting to pass him on his left-hand side as he blocked the faster Mercedes.

In the second practice session, Verstappen finished with the fastest lap, but left his team with work to do before qualifying on Saturday as he crashed into the barriers after losing the rear end right at the end of the session.

Red Bull will be anxiously waiting to see how damaged the car is, and if the error will affect the vehicle's performance over the rest of the weekend.

Hamilton finished the session in third place, behind Verstappen and Valtteri Bottas.