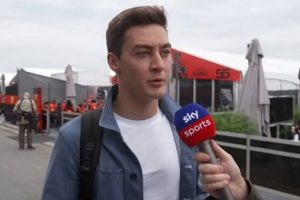 George Russell has welcomed the FIA’s plan to combat the aggressive bouncing which has affected F1 cars this season – even if it hinders Mercedes’ hopes of closing their deficit to Red Bull.

Porpoising has been the talk of the paddock in 2022 following one of the biggest regulation changes in the sport’s history. The issue came to a head on Sunday when Lewis Hamilton was left in agony with back pain during the Azerbaijan Grand Prix and had to be helped from his car after finishing fourth.

Mercedes aren’t the only team to have been affected, with Daniel Ricciardo and Carlos Sainz among the other drivers to speak out about the issue which, it is feared, could have a long-term impact on drivers’ health if a remedy isn’t found. As a result, the FIA, which devises the sporting regulations, have released a statement ahead of this weekend’s Canadian Grand Prix about how they plan to tackle the problem.

And it will not necessarily help the pace of Mercedes, who could be required to raise the ride heights of their cars. While that would ease the strain on their drivers, it could also see them lose performance at a time when they are already well off the pace compared to Red Bull and Ferrari.

However, Russell, a director of the Grand Prix Drivers Association (GPDA), said the drivers have pushed for changes in the interests of safety, not performance.

Asked by Sky Sports’ Martin Brundle if the measures could adversely affect the reigning Constructors’ champions, Russell said: “I think everyone thinks this is something Mercedes is pushing for, but from a pure performance side of things, we don’t really want change.

Who will win the Canadian Grand Prix? Have your say in the comments section below

“Because if there’s change you never know if it’s going to go for you or against you. We, as drivers, have spoken about this, that we want change moving forward because what we went through last weekend wasn’t sustainable.

“It doesn’t matter what boat you’re in. You’re either porpoising and you’re hitting the ground or you have no porpoising so you’re running the car very close to the ground and you’re bottoming. Either way you look at it, it’s not great.

“I think it’s promising to see that they’ve taken action on this straight away. It’s not taken them months and weeks and political decisions to change something like that. When it comes to safety, things need to be resolved ASAP. I think it’s good for everyone.”