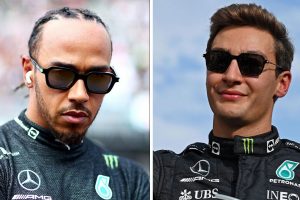 Lewis Hamilton on difficult season for Mercedes in November

George Russell has warned Toto Wolff that a breakdown in the relationship with Lewis Hamilton could have a major effect on Mercedes’ chances in 2023. The former Williams star stressed any issues in the dynamic between the teammates would “have an impact on the team”. However, the 24-year-old has predicted this would come “full circle” and affect their on-track performances.

With this in mind, Russell aims to keep the harmony in place into 2023 as the Silver Arrows aim to close the gap to Red Bull. Russell has admitted he and Hamilton were “in this together” after a disappointing 2022 yielded little success.

According to Autosport, he said: “We’ve got no reason to have conflict. We have got a good relationship. We need to give each other respect, and I think we gave each other respect [in Mexico]… We recognise the importance of that within the whole team.

“If our relationship starts to break up, it’s going to have an impact on the team and ultimately it’s going to go full circle and affect us as well.

“I think we can continue to build off this and if anything our relationship will probably get closer as time goes on.” Russell became only the third team-mate of Hamilton’s to beat the seven-time champion over the course of a season after an impressive debut year in 2022.

Mercedes boss Wolff claimed Russell’s position was “irrelevant” as the team was not racing for victories. The German marque also tried to claim Hamilton’s deficit to Russell was simply down to “set-up experiments”.

However, albeit for a slight mid-season blip, the Kings-Lynn driver maintained his advantage throughout the year.

Russell finished inside the top five at almost every race he finished while also picking up the squad’s only win of the season. Hamilton has praised Russell’s performance and revealed the pair still enjoyed a “strong” working relationship.

He explained: “I’m a lot older and I’ve been with the team so long. So managing whatever challenges we come up with moving forward, we’ve been through so much that I don’t think it’s going to be a problem.

Hamilton added: “It’s been super easy to blend in. He uses my steering wheel, and he’s obviously got to do the test days prior to the year, so I think he’s just blended in perfectly and he’s been a positive force in the team. He’s helped keep the equilibrium in the team, in terms of the working relationship I think it’s strong.”