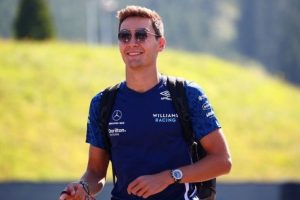 Williams boss Jost Capito has lathered praise on George Russell after the Briton finally scored his first points for Williams in Hungary, praising his ability to deal with pressure as the Mercedes junior driver remains in contention for a seat with the seven-time world champions next season.

Russell has fiercely fought for points this season, wringing out every bit of performance from his Williams car, narrowly missing out on a points finish throughout the season.

Yet the 23-year-old didn’t allow the setbacks to deter him from his mission, and each weekend returned back to the track with a wide smile on his face, determined to score points, eventually crossing the line P9 in Budapest.

“I have to say, I had hardly seen him that motivated as I saw him Sunday before the race having qualified 18th,” Capito told F1.com. “Instead, he said ‘today is the day, I will see what I can do. I will fight’.

“He was so focused and determined, even more than when he qualified eighth [at Silverstone]. That was really great to see.

JUST IN:
Max Verstappen fans urged not to ‘act like hooligans’ at Dutch GP

“We saw that when he was in the Mercedes last year [deputising for Lewis Hamilton who had tested positive for Covid-19]. It was the biggest pressure you could put on any driver and he performed brilliantly – and this is his attitude.”

Russell was heard on the radio asking Williams to prioritise his team-mate Nicholas Latifi mid-race, with the Canadian in a stronger positions for points at the time.

“It was sort of an undercut race in Hungary,” explained Russell.

“So I knew Nicholas was in third and I knew if he came home with a P3 or a P4, those 15 or 12 points would be absolutely enough to seal P8 in the championship.”

And Russell’s current boss said the gesture was a testament to the type of driver he is.

“This is the unbelievable team spirit of George,” said Capito. “He really puts the team first. It’s also the result of how George works with the team, and how the team works with George.

“For the drivers, the team comes first and they benefit from this and that puts them in this position.

“It shows what George’s thinking is like and how mature he is during the race. He analyses the situation and thinks about what it means for the team if they have a chance, and he does that all during the race, where many other race drivers wouldn’t even think about it.

“He can overlook the overall situation, and doesn’t need an engineer to tell him what the situation is.”

Rumours have continued to follow Russell this season about his potential move to Mercedes, with the Williams driver a free agent come the end of the season, however, to achieve that feat would mean replacing current driver Valtteri Bottas.

The young Mercedes junior driver firmly planted a seed in boss Toto Wolff’s mind after impressing during the Sakhir Grand Prix, standing in for Hamilton for the penultimate race of the season.