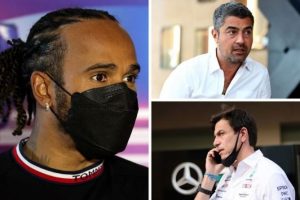 The FIA are said to be torn on a decision regarding FIA race director Michael Masi as Mercedes are reportedly putting pressure on the governing body to sack the Australian after a controversial end to the Abu Dhabi Grand Prix. Lewis Hamilton was on course to win an eighth world title when Masi changed the course of the future with a dubious decision during the race under a safety car period, with the FIA now desperate to repair the integrity of the championship.

The fallout started after the Australian allowed just the five cars between leader Hamilton and second-placed Verstappen un-lap with just five laps remaining of the race.

At the time, Hamilton, who was fighting for a record-breaking eighth title, was on course to become the greatest F1 driver in history if he could hold off his main title rival Max Verstappen.

But the tables turned after Masi allowed the race to resume without all the cars having time to un-lap themselves, with Mercedes furious in the garage and Hamilton seething under his race helmet.

It meant Verstappen, on far fresher tyres after pitting, was able to sweep past the seven-time world champion to win the title.

Since then, Hamilton has been silent on social media and has only been seen once in public to be knighted at Windsor Castle. He is believed to have been left “disillusioned” by the events.

JUST IN:
FIA add fuel to the fire over Michael Masi’s future

According to the Daily Mail, boss Toto Wolff is due to speak to the new FIA president on Friday to discuss the end of the season incident, a meeting that could decide Hamilton’s future in Formula One.

The news comes after the BBC reported Mercedes had dropped their appeal against the FIA after agreeing a deal to sack Masi and technical head Nikolas Tombazis.

The sacking is said to be a key factor in if Hamilton will return in time for pre-season testing, despite two years remaining on his contract.

Mercedes have denied the reports, insisting instead it was dropped after the team received reassurances from senior members of the FIA that appropriate action would be taken after the incident and that Hamilton was just taking some time out.

Former F1 chief Bernie Ecclestone, whose wife Fabiana became the first woman to be elected vice-president for sport in South America, believes Masi should remain in his role.

‘I see no reason whatsoever why Michael should not continue in his job,” Ecclestone told the Daily Mail.

‘He did what he thought was best. You can say I would do this or that or the other. But it would have been awful if the final race had ended under a safety car. Michael would have got in just as much trouble. He is a good man and the FIA should stick by him.’

After the events, the FIA pledged to investigate to avoid “tarnishing the image of the championship” and added they will speak with “all relevant parties” during an investigation.

No information has been released yet with a source telling the Daily Mail: ‘The Abu Dhabi matter is the first issue on the new president’s agenda. He wants to come up with a response. The deadline is the World Motor Sport Council meeting on February 3 — but there may be news before then, such is the urgency of this.’

After contacting Hamilton five days after the race, the president Mohammed Ben Sulayem said: “I don’t think he’s 100% ready to respond right now. We don’t blame him. I understand his position.”

To add fuel to the fire, Masi has not been listed on the new FIA General Organisation Chart released for the month of January 2022 amid the speculation he could be fired.

His colleague Tombazis is also noticeably absent from the document.