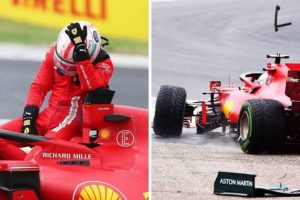 Ferrari have suggested Formula 1 and the FIA should consider introducing a system that would see the guilty driver’s team pay for repairs after Charles Leclerc’s race was ruined during the Hungarian Grand Prix due to contact.

Leclerc was wiped out by Lance Stroll at the first corner, in a separate incident from Valtteri Bottas’ error, which saw four cars, including the Mercedes, retire from the race.

The Aston Martin driver was hit with a five-place grid penalty for the next race, the same as Bottas’, for taking out Leclerc, however, with calls from Red Bull to look at F1’s cost cap regulations thanks to two big back-to-back crashes, Binotto says there is a solution.

“I think there is value for discussions in the near future with the other team principals, FIA and F1,” said Mattia Binotto, speaking to Autosport.com.

“Obviously if you’re not guilty, having such damage in the budget cap is something which is even more of a consequence now.

“Should we add exemptions? I’m not sure that’s the solution. I think it may be very difficult to be policed.

“But I think that what we may consider is that if a driver is faulty, the team of the driver should pay at least to the other teams for the damages and repairs. That will make the drivers more responsible.”

Red Bull were left with huge bills after the Silverstone Grand Prix, where Lewis Hamilton was deemed at fault for a collision with Max Verstappen, with the Red Bull left with significant damage, costing $1.8million to repair, a whack out of their $145m budget cap.

Now, they’re faced with more repairs after Sergio Perez and Verstappen were collected in a first corner pile-up, deemed the fault of Bottas.

Now, they’re faced with more repairs after Sergio Perez and Verstappen were collected in a first corner pile-up, deemed the fault of Bottas.

Verstappen was able to continue and finish with two points on the board, but Perez’s engine was unsalvageable – with the team now concerned they could face a penalty for both drivers due to changes of parts.

“I think it re-affirms that when you have an incident that isn’t your fault, that we’re paying a significant price for that and that’s something that isn’t budgeted for.

“It is something that I think does need to be looked at in greater detail by the FIA.

“It’s spare parts and it’s the engines as well, which is particularly concerning. I think we need to revisit this with the FIA because ultimately is something that can affect all teams, not just Red Bull.”