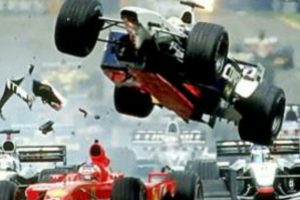 Driver safety has improved significantly in Formula One decade after decade but accidents are inevitable, with one particular incident in Australia 20 years ago standing as one of the most dramatic in the modern history of motorsport.

In an era before the introduction of the halo on F1 cars, a change that was initially controversial but has proven to be a welcome addition, Ralf Schumacher's collision with Rubens Barrichello was one that could have caused disaster – with eight cars involved in the smash.

Early in the race, Ralf made a move on his older brother Michael Schumacher to secure second position and challenge Ferrari driver Barrichello for the lead. As one Ferrari turned left to provide the best possible entry for the Brabham corner, the other switched lanes to try and block Ralf, who turned into the centre.

Barrichello braked early, catching Ralf out, who struck the rear of the Ferrari at around 150mph – launching him over his opponent, grazing the top of Barrichello's helmet and travelled for 100m before resting in the tyre wall, while the rear-wing of the Ferrari flew off and caused further incident.

Michael Schumacher and Kimi Raikkonen were able to avoid the melee, driving onto the grass, but Giancarlo Fisichella struck Sauber pair Nick Heidfeld and Felipe Massa, which caused Jenson Button, Olivier Panis and Allan McNish to also get caught-up.

Barrichello and Ralf Schumacher, the pair who started the accident, were summoned to the stewards after what was their third collision in two seasons but neither received a penalty and were given a warning, with the crash declared a 'racing incident'.

Blame for the incident was a hot topic though, with Michael Schumacher believing his Ferrari teammate braked earlier than normal, saying: "I was afraid to turn into the first corner because I suddenly saw cars flying next to me. I decided to go straight on and have a nice ride through the grass, which was a good decision, otherwise I guess I would have been hit."

HAVE YOUR SAY! Was the introduction of the Halo a life-saver in Formula One? Comment below.

Barrichello's assessment of the incident was brief, stating: "If he wanted to overtake on the outside, he should have moved a lot further. I didn't get in his way," while three-time world champion Jackie Stewart believed Schumacher misjudged the braking and David Coulthard thought Barrichello was responsible for breaking too early.

All eight cars involved in the collision were forced to retire on the first lap and set the precedent for what was a remarkable race, with Jarno Trulli, Takuma Sato, Jacques Villenueve and Coulthard all having to retire later in the race, while Arrows-Cosworth pair Heinz-Harald Frentzen and Enrique Bernoldi were disqualified.

That meant that just eight of the 22 runners in the 2002 Australian Grand Prix completed the race, with the top-six picking up points and leaving just two drivers without any return – with this coming before the current regulations that award points to the top 10.