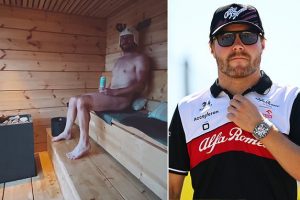 BOTT-NAKED! F1 star Valtteri Bottas leaves little to the imagination as he prepares for the Singapore Grand Prix with his ‘daily ritual’ nude sauna back at his home in Finland

Valtteri Bottas left little to the imagination of his fans after sharing a video on Instagram of his taking a sauna completely naked.

The Finnish driver shared a reel to his 3.4 million followers of him sat in his home sauna, nude, with nothing but a festive reindeer hat on his head.

‘Singapore prep for some, Finnish daily ritual for us,’ the Alfa Romeo F1 driver is heard saying towards the camera, as he puts more stones onto the fire pit to increase the temperature. 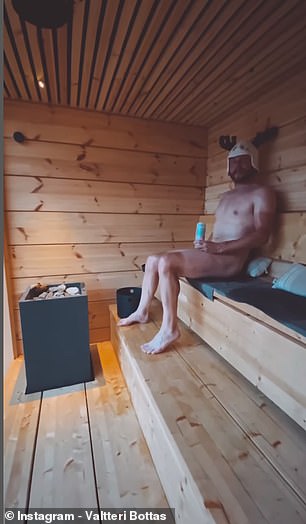 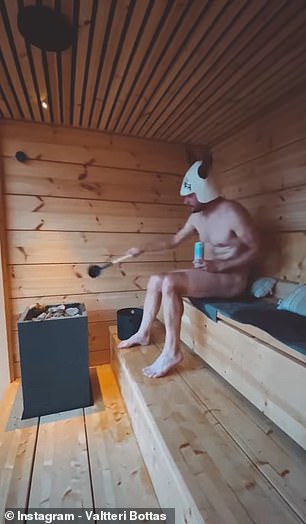 Before entering the sauna race fans see the Finn increase the room temperature to 100c.

To avoid exposing himself to the camera, Bottas is seen holding a can between his legs, covering his manhood and maintaining his modesty.

Nonetheless, fans were blown away by the Alfa Romeo star’s X-rated post as he unwinds back in his native Finland.

Another added: ‘What is the first thing I see when I open IG? BOTTAS BUTT NAKED IN A SAUNA.’

Fans were quick to recall the time Lewis Hamilton, Bottas’ long-time team-mate at Mercedes, being caught totally off guard when as a rising star in Formula One he was taken to a Finnish sauna, only to be caught completely off guard when a man got undressed.

‘Being grown up in England you are very private and covering up,’ Hamilton told Finnish newspaper Turun Sanomat.

‘We came to the Sauna side, three of us in the Sauna, and me and Adam (Costanzo, his trainer) kind of trying to cover up the private parts. Aki (Hintsa, then head of well-being at McLaren) was just sitting there his legs open, and saying this is great, so great.’ 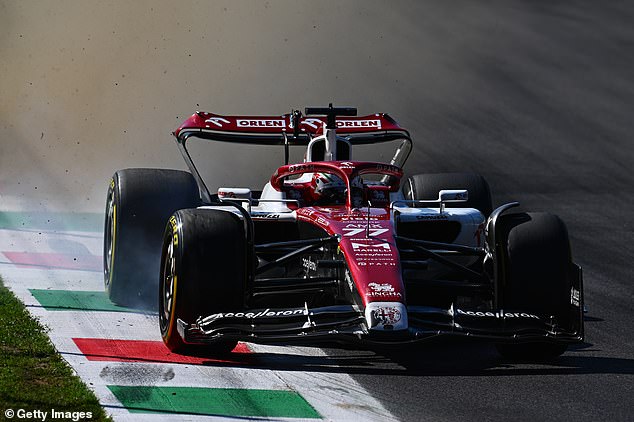 Bottas has cut a more relaxed figure as Alfa Romeo’s No 1 driver, having left Mercedes in 2021

Bottas is cutting a more relaxed driver since leaving Mercedes in 2021, in and out of his sauna.

He is the No 1 driver at Alfa Romeo and will continue to be partnered by China’s Zhou Guanyu after the team extended the rookie’s contract.

‘I think the team are very satisfied with everything I was able to do and I’m happy with the job I was able to prove so far this season,’ Zhou said. ‘Looking forward to having many more to come together.’

Alfa Romeo’s decision leaves only three teams – Alpine, Haas and Williams – with a vacant seat for on the grid for 2023.