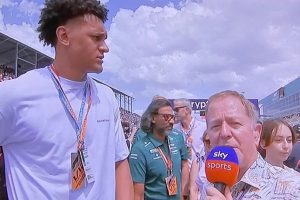 The Sky Sports mic man stopped for an interview with someone he thought was NFL superstar Patrick Mahomes, after being told that quarterback was nearby, when in actual fact it was basketball star Paolo Banchero.

Having wrongly addressed him as "Patrick", Brundle was initially ignored by Banchero, and after about 15 seconds of their awkward exchange, the British former F1 driver realises that he's got the wrong man. The only trouble was, he still had no idea who the bloke he was chatting to was.

After asking Banchero what he thought of the atmosphere around the circuit, the 19-year-old replied: "This is crazy. I've never been to an F1 race so this is spectacular. You can see, [the drivers] are locked in. It reminds me of myself. A real focus."

Suddenly, Brundle cottons on after getting a message in his ear, and stops the interview abruptly, saying: "It's not Patrick [Mahomes], that's why he ignored me in the beginning … what is your name, sir?"

What's the most awkward interview gaffe you've ever seen live? Tell us about it in the comments section.

"Right, OK," Brundle responds, with total indifference. "Well I thought I was talking to somebody else, so I'm sorry about that."

"Super awkward … and that's on the internet forever now," one fan tweeted.

"After he found out he acted like my man was just some random schmuck, oh ya know he’s only gonna be the #1 pick in the NBA Draft and a future superstar," another wrote.

Some F1 fans defended Brundle's blunder, with one joking: "Maybe American athletes should stay off the F1 grid if they don't realise the guy interviewing them is former F1 driver Martin Brundle!"

In Martin's defence, you don't expect there to be more than one 6'8"+ giant roaming about on the pre-race grid do you?