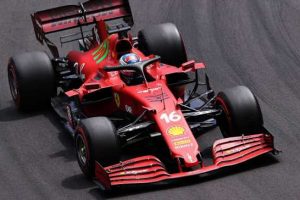 MONACO — Charles Leclerc failed to start the Monaco Grand Prix after his Ferrari encountered a driveshaft issue on the way to the grid.

Leclerc was due to start the race from pole position, giving him a good chance of winning his home race, but he completed one reconnaissance lap on his way to the grid before reporting a gearbox issue and returning to the pits.

The pit lane is only open for 10 minutes ahead of the race to allow all 20 driver to circulate the track and take up their positions on the grid.

Ferrari were not able to fix the issue before the pit lane closed 30 minutes before the start of the race and later confirmed Leclerc would not take part at all.

“Charles will not start the race due to an issue with the left driveshaft which is impossible to fix in time for the start of the race,” a team spokesperson confirmed

Leclerc secured pole in unusual circumstances on Saturday, setting the fastest time on his first attempt in Q3 before crashing into the barriers on his second.

The accident resulted in the session ending early, preventing Leclerc’s rivals from beating his time.

Ferrari had been concerned the collision with the barriers may have damaged the car’s gearbox, knowing a change ahead of the race would result in a five-place grid penalty.

The team confirmed on Sunday morning that it had checked the gearbox, found no damage and would not need to change it.

But as Leclerc went out on track for the first time, he encountered an issue with the drivetrain and returned to the pits immediately.

His mechanics attempted to fix the problem, but confirmed to the FIA 20 minutes before the race that the car was beyond repair in the time available.