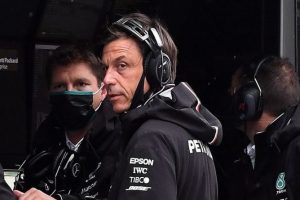 Nico Rosberg tells of his willingness to befriend Lewis Hamilton

Masi’s use of a safety car in the latter stages of the race allowed Max Verstappen, on fresh tyres, overtake Lewis Hamilton on the final lap and win his maiden world title.

Hamilton had comfortably led the field for the majority and was unbelievably denied a record-breaking eighth Drivers’ Championship.

There was mass intrigue about the result of Wolff and Ben Sulayem’s meeting, but all that came from it was silence.

And amid the secrecy of the discussion, Hamilton’s stance on returning to the grid this year remains unclear.

But the Mail have revealed details, stating Wolff and Ben Sulayem didn’t reach a firm agreement over Hamilton’s F1 future.

Both parties are reluctantly awaiting the outcome of the FIA’s lengthy investigation into the Abu Dhabi Grand Prix’s conclusion.

Earlier this week, the FIA confirmed it had started ‘detailed analysis’ on the race, and final decisions would be announced at the FIA World Motor Sport Council meeting on March 18.

Unbelievably, that’s just two days before the 2022 season-opening race in Bahrain, but an update on the investigation’s direction will likely come to light before then.

Masi’s role as F1 Race Director still hangs in the balance after his controversial calls in Abu Dhabi.

The Mail report Wolff wants him to lose his job amid talk of Hamilton awaiting whether he is sacked before deciding whether to fulfil the final two years of his £30million-a-year Mercedes contract.

Sources close to the situation are split on whether Masi should continue as Race Director this season, with some accusing Mercedes of bullying the FIA into getting what they want.

He said: “If the FIA and F1 want Michael Masi to stay, and if Michael Masi wants to stay, he’s clearly only got one life left. So I don’t know if that’s tenable all around.

“Who would you replace him with? Be careful what you wish for, I would say in this.

“What I absolutely know for sure is that changing Michael Masi will not fix the problem. This is way too big a job for one person to handle, in a 23-race season that’s only going to grow.”