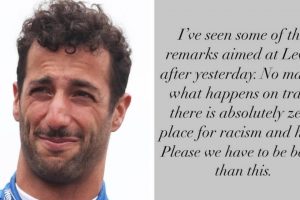 But the British driver’s win was overshadowed by a collision with Red Bull’s Max Verstappen on the opening lap, where the Dutchman crashed into a tyre wall at 289 km/h.

Red Bull later confirmed Verstappen had been discharged from hospital “following a thorough medical examination, without any major injuries”.

As first reported by Sky Sports, an Instagram post from the Mercedes team celebrating Hamilton’s success was flooded with racist messages and monkey emojis.

English football stars Marcus Rashford, Bukayo Saka and Jadon Sancho were similarly targeted by a torrent of disgusting threats and abuse after missing penalties in the wild 3-2 loss to Italy in the Euros final.

Ricciardo released a statement on Instagram on Tuesday morning AEST: “I’ve seen some of the remarks aimed at Lewis yesterday. No matter what happens on the track there is absolutely no place for racism and hate. Please we have to be better than this.”

“Whilst the rivalry is intense on track for the Championship, highly charged emotions should never cross the line into racist abuse,” Christian wrote.

“We have a zero tolerance approach to racist behaviour within our Team and I personally feel strongly that those responsible for this sort of abuse should be held to account.

“We will continue to support the FIA and F1 in order to eradicate this from our sport.”

Hamilton remains the only Black driver in Formula 1 history, and has been an outspoken advocate of the Black Live Matter movement.

The 36-year-old has fought to improve opportunities for people of colour in the motorsport industry and the United Kingdom’s education system.

Last year, Hamilton criticised Formula 1 for a “rushed” pre-race anti-racism display at the Hungarian Grand Prix, speaking to officials to ensure drivers are given more time to convey their message.

He also took aim at the Formula 1 paddock over an eerie silence that fell over teams in the wake of George Floyd’s death in Minneapolis.

The 2021 season will resume on Sunday, August 1 with the Hungarian Grand Prix.